Wayne Simmonds is the “Total Package” for the Flyers! 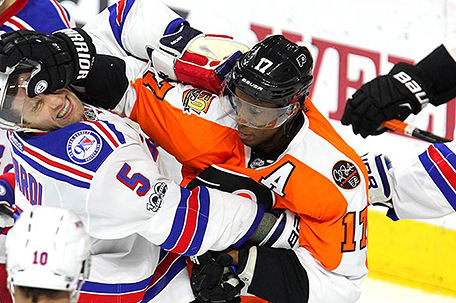 Wayne Simmonds, known as the “Wayne Train” to his teammates, has established himself as one of the best power forwards in the National Hockey League.
Simmonds, who is playing in his ninth NHL season, signed a six-year, $23.9 million extension with the Flyers in 2012. He had come from the Los Angeles Kings in a 2011 trade that brought him and Brayden Schenn to Philadelphia in exchange for Mike Richards and Rob Bordson.
He’s an investment that’s paid off well for the Flyers and their fans, getting better and better with each passing year. The tireless self-starter leads the team in scoring with 30 goals and is also first in power play goals in the NHL. Last year, he scored 32 goals, and the year before 28. He has a total 200 goals during his career.

This year, Simmonds made his first NHL All-Star game appearance and became only the second Black player to win the game’s Most Valuable Player award. He scored three goals, including the game winner to join Edmonton Oilers goaltender Grant Fuhr as the lone Blacks to win the honor. Fuhr took the honor during the 1986 NHL All-Star game.

Most people around the league say Simmonds is physical around the net and the toughest to move out of the way. He is the most feared fighter on the team and does the necessary little things to win games.  He is an unselfish hockey player and his teammates love him.
Simmonds was born in Scarborough, Ontario.  His parents Cyril and Wanda have instilled the values of working hard and doing your best. His parents had to sacrifice for Wayne to play at the minor level and AAA. “My parents would give everything off their back to help you. They told me to work twice as hard as anyone else.  That’s how I live my life” said Simmonds.
“My father took me skating at the age of three. One of my older brothers played junior hockey and that’s what got me inspired.  I got four brothers and one sister.  In my family we fought for food, if you didn’t finish your plate someone would dust it off. That’s how I got my toughness” laughed Simmonds. 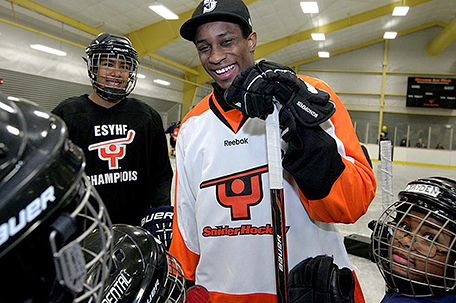 One of the people he respected and admired is Willie O’Ree, the first Black player in the N.H.L, who played for the Boston Bruins in 1958.  “He is a beautiful human being and trendsetter. He was a solid, up and down hockey player. I loved to watch him play,” Simmonds said.

A couple of years ago when the Harlem Globetrotters came in town, Flyers’ captain Claude Giroux teamed-up with Simmonds, planning a secret weapon against the Globetrotters during one of their games.  Claude tossed the basketball off of his hockey stick and Simmonds jumped sky high and slam dunked the ball. The fans went crazy!!

Simmonds also gives back to the community. He served on the board of directors for the Ed Snider Youth Hockey Foundation to help urban kids in hockey.  He also has his own charity in his home town of Scarborough, Ontario. “My charity is Hockey Warriors. Every summer for the past five years we bring out NHL hockey players to teach the kids about playing hockey. It’s open to everyone who wants to participate. It is a means of teaching children values for life through hockey.”

Simmonds wants the Black community to embrace hockey. “Most Blacks have basketball, football and baseball. It’s about exposure to the game. You have to learn and love hockey. My job is to inspire kids to play. You don’t have to be rich to play it. You have to put your mind and heart into it. If I can do it, you can do it too,” Simmonds said.

Flyers do everything but score in season-opening loss to Toronto