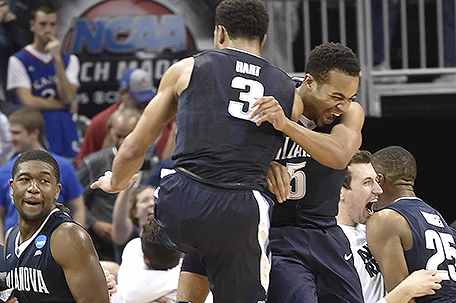 Even if Villanova doesn’t end up cutting down the nets as the NCAA National Champions Monday night in Houston, you can’t say that it’s been another disappointing year for the Wildcats.

After a couple of years of early exits as a high seed, the Wildcats dominated most of their tournament opponents and ground out a tough win over Kansas in the South Regional Final and now they’re two games from winning their first national championship since 1985.

Standing in their way is the University of Oklahoma’s all-everything senior point-guard Buddy Hield and his ability to score from just about everywhere. In the Sooners regional final win over Oregon, he was virtually unstoppable, scoring 37 points and shooting 8-of-13 from three-point range.

Earlier in the season, the two teams played each other in Hawaii with the Sooners coming away with a 78-55 win.

“We did a decent job on Hield in the first game, and [Isaiah] Cousins killed us,” he said. “So we know it’s going to be more than a basic plan. I think that’s how it’s going to go. We aren’t going to just do one thing because those guys are too smart and too good for that.”

“Hopefully, we can shut them all down,” Villanova point guard Ryan Arcidiacono said.

“We know it’s going to be tough. We know they are going to score their points and make their shots, so we just have to make sure they are tough contested shots.”

While Wright concedes that his team will be a facing an Oklahoma squad that’s only gotten better with time, the same could be said about his squad, he said.

For example, the Sooners are going to have to figure out how to stop Villanova’s three-headed monster of Josh Hart, Kris Jenkins, and Arcidiacono, all of whom average in double figures in scoring. If those three get going for the Wildcats, expect lots of flying basketballs.

“Oklahoma has obviously gotten better but we have gotten a lot better in my mind,” Wright said.

In that early-season game against the Sooners, the Wildcats had problems scoring from three-point range, hitting 4-of-32 shots from behind the arc. To counteract the Sooners, they’re going to have hit their long-range shots, but they’re also going to have to go into the low post, something they did to beat Kansas in the regional final.

“We want our guys to come in and be really confident and aggressive at the start,” Wright said.

“We realize when we do that we’re going to look bad sometimes, and then over a season, we want to go from aggressive to intelligent, without losing that aggressiveness,” continued Wright.

But in the end, how the team performs on the court is all that counts, said Brunson, a freshman who averages 9.8 points and shoots 38 percent from three-point range.

“As a whole, everyone’s been getting a lot better, but also, Oklahoma has gotten better…We’ll have to get out there and see.”