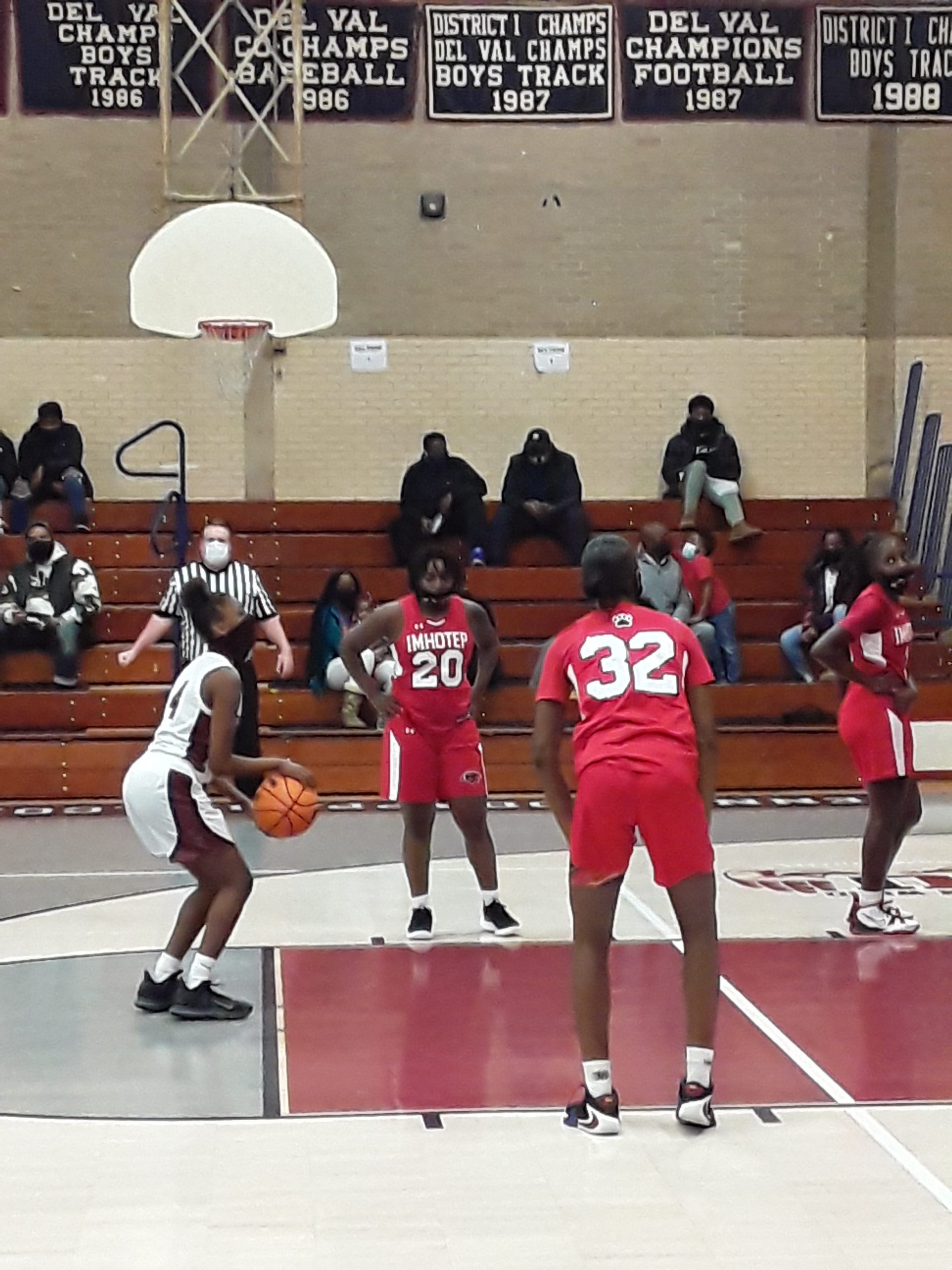 By Napoleon F. Kingcade
By the time Pennwood junior guard Lashanda Smith scored her 32 points last Tuesday night’s home game, the Pennwood Lady Patriots already had this game in the bag. They totally shut down their opponent’s offense. The Imhotep Lady Panthers were out of gas–they had nothing left in the tank. With under two minutes left in the game. Pennwood held a commanding 69-54 lead.

With their fourth victory in sight, Ashley Cyrus received an outlet pass. The 5-3 Pennwood guard scored the team’s final basket. Cyrus scored on a clean breakaway. Pennwood won the game, 71-56.

The team staged a big celebration. Pennwood finished the 2021 regular season at 4-4. The Lady Patriots were glad to stop their three-game losing streak. Now, they must wait to see if they will be invited to the playoffs. Cyrus finished Tuesday’s game with 23 points. She wanted to score 30 points, but the victory meant more to the Pennwood High senior.

Due to Pennwood head coach Monique Boykins being out sick for most the season, her assistant coach, Qwyn Durrett, has been running the team. So before the game started, Coach Boykins sat in the stands. She wanted to support Ashley Cyrus and Racquel Curry on “Senior Night”.

After the playing of the national anthem, things didn’t look too good for the Pennwood team. In the first half, the Lady Patriots kept playing sloppy basketball. They also made too many mistakes on defense. They committed too many turnovers.

However, in the second half, things started to get better. Pennwood managed to turn the game around. The Lady Patriots went on a 22-15 rampage and erased a 31-24 halftime deficit. Pennwood changed up their defense. The girls started playing man-to-man. They started attacking at half-court and put a lot pressure on the Imhotep shooters.

Pennwood was able to shut down Imhotep’s offense. They stopped Imhotep senior guard Janai Smith in the second half. She had 11 points at halftime. And they also stopped Seaniajah Smith who had 9 points at halftime. They didn’t allow Imhotep’s 6-4 center Trai Ebo to score any points in the paint. Pennwood turned the power switch off and didn’t allow Imhotep to get to the basket. Pennwood only allowed 25 points in the second half.

“Our players really stepped up big and they did what they had to do to win this game,” said senior guard Ashley Cyrus. “Each player played their role. We were told to just play basketball and take it one play at a time. And we were also told to keep fighting back.”

That became a big factor in Cyrus’ performance in the game. The Pennwood senior guard scored 8 points at halftime, but she scored 15 more points in the second half. Cyrus enjoyed putting a smile on her mother’s face, especially on “Senior Night”, a night when she and teammate Racquel “Rocky” Curry were honored as the team’s only seniors. Addition to being teammates, the players are also best friends. Both of them played four years together. Last season, they helped the Pennwood High girls basketball team become Del Val Champions.

Thank god Coach Boykins still had junior guard LaShanda Smith on the team. Smith helped shoot the lights out against her former high school squad. Smith left Imhotep last year after she gave birth to her baby. Against her former team, Smith scored 12 points in the first half and added 20 points in the second half. She set off fireworks that ignited the Pennwood girls.

For the game, Coach Boykins was only able to suit up eight players. That meant she had to depend heavily on her starting five to stay in the game. Fortunately, Pennwood was able to avoid that problem. The Pennwood girls managed to rebound from a poorly played first half. They blow away their opponent in the second half. The Imhotep Lady Panthers are a Public League team that played in last year’s Public League championship game.

“Tonight, it meant a lot for us to win this game,” said Cyrus. “All we had to do is listen to our coaches. And we did that tonight. That’s the part of Pennwood High, I will miss the most. I will miss my coaches, I will miss this gym, I will miss the locker room and the teachers in this school. I will also miss Coach Mo. If it wasn’t for her, I wouldn’t be the player that I turned out to be today. I will really miss Coach Mo. She has always been there for me.”
In her first game back since January, Pennwood High girls’ basketball coach Monique Boykins was more than happy to rejoin her team. In last Saturday’s game on March 6, Coach Boykins was able to lead the Pennwood Lady Patriots (5-4) to a 63-60 victory over Perkiomen Valley in the first round of the Dis-trict 1 PIAA state playoffs.

At halftime, Pennwood trailed Perkiomen Valley by a score, 32-28. But the Lady Patriots played much better basketball in the second half. They were able to outscore their opponent, 34-28. Pennwood won the game, 63-60.

Pennwood guard Ashley Cyrus helped lead the way for the Lady Patriots as she scored 20 points. Cyrus was able to knock down four treys to pump up the team’s offense. Coach Boykins said she couldn’t express enough of how proud she felt about her team’s playoff performance. She felt happy that the Lady Patriots picked up the victory against Perkiomen Valley.

The Lady Patriots were scheduled on Wednesday, March 10, to battle undefeated Spring-Ford High (19-0) in the second round of the PIAA playoffs, a team they hardly knew anything about. Despite being clueless about Wednesday’s opponent, Coach Boykins said her team was still ready to face Spring-Ford High in their current playoff run.