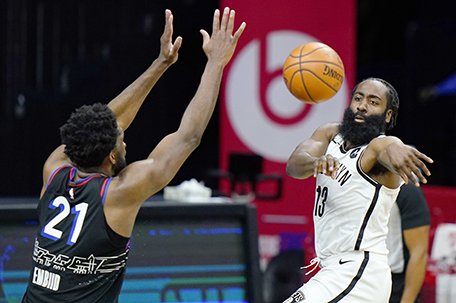 ABOVE PHOTO: Brooklyn Nets’ James Harden (13) passes the ball against Philadelphia 76ers’ Joel Embiid (21) during the second half of an NBA basketball game, Saturday, Feb. 6, 2021, in Philadelphia. (AP Photo/Matt Slocum)

Your Philadelphia 76ers are hoping to keep your cynicism at bay.

When Philadelphia 76ers fans look at the current NBA standings, they’re either excited about the fact that their favorite team is in first place in the Eastern Conference or they’re skeptical about whether or not they’re good enough to keep it going.

As the team took its 17-7 record out west for a four-game series with the Sacramento Kings, Portland Trailblazers and Phoenix Suns and Utah Jazz, it looked pretty good.

But the Sixers and head coach Glenn “Doc” Rivers have been there before. They’re not resting on their laurels.

There are more than a few reasons for Sixers fans to be optimistic about their chances. First and foremost, Embiid has been playing like the true superstar that we all thought he would be when the team made him its No.1 draft pick five years ago.

Rivers gives his center a lot of the credit for the team’s current position, saying that the reason they are currently the top team in the Eastern Conference is because of Embiid’s scoring and the team’s consistency on defense.

“Defensively, we’ve been very solid overall,” Rivers said after last Saturday’s win over the Brooklyn Nets. “I think we have Joel playing in a great place, in a great spot. I think our guys understand how to play around him. I think putting the ball in Ben’s [Simmons] hands have worked for us.”

At this point, Rivers is not so concerned about Sixers point guard taking jump shots. He is more focused on the offense that Simmons can create scoring opportunities for his teammates with the ball in his hands.

“It’s amazing what he singlehandedly does for your offense,” Rivers said. “I don’t know if anyone in the league that creates more threes than Ben does. Maybe, LeBron (James) possibly. He just a great knack with the floor space. We’re doing good of spacing the floor which allows Ben to get in the paint in transition, sucks someone and Ben finds them. It’s been very good for us all year.”

Embiid is having a career year, averaging 29.3 points per game. In the Sixers win over the Brooklyn Nets (Feb.6), Embiid scored 33 points. The former Kansas star is among the top vote-getters for the 2021 All-Star Game and is an early MVP candidate.

Embiid’s consistency in the low post has been a plus for the team, Simmons said.

“I think he realizes how dominant he is down there (in the low post) and he continues just to get better, especially in his passing and his patience,” he said. “He lets the game to him a little bit more now. He’s just been dominant. I don’t see anybody that can stop him.”

One of the beneficiaries of Embiid’s work in the low post has been small forward Tobias Harris, who has been averaging 20 points per game. In the game against the Brooklyn Nets, he scored 21 points.

“He’s been great, he’s been consistent all season,” Embiid said. “He’s getting the job done. I’ve been pushing for him to an All-Star. He deserves it. We wouldn’t be the No. 1 seed it wasn’t for his big contributions.”

While the offense goes through Embiid, Harris said when the team follows the script of playing good defense and sharing the basketball on a consistent basis.

“It’s about us being dominant defensively and offensively that’s us sharing the basketball and making quick decisions and playing with great pace,” Harris said. That’s been our formula all year. In games where we’re able to then move the basketball, get multiple passes and shot attempts and we’re able to get body movement. …. That’s been our success story thus far and we have to do that night after night.”

The Sixers play the Utah Jazz in the last game of their West Coast road trip Monday night at 9p.m. You can catch the game on NBC Sports Philadelphia.