Up and coming fighter from North Philadelphia overdue for a title 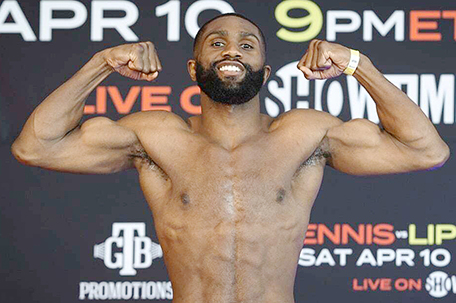 Jaron “Boots” Ennis is showing everyone that it’s time he got his shot.

In a welterweight division filled with guys who have held at least one of the myriad of its championship belts, stands a North Philadelphia native who feels that he should be mentioned in the same breath as unbeaten champions like Terence Crawford and Errol Spence.

With every punch, he makes his case.

“[I] definitely feel like I’m getting stronger fight by fight and I was getting stronger as the rounds were going on as ya’ll can see,” Ennis said. “If I had gone to the 12th round, I would have had the same power. I just get stronger and stronger.”

Ennis is looking to take on anybody willing to face him in the ring, including guys like Crawford, Spence, Shawn Porter, or even another local Philly favorite in former world champion Danny Garcia.

“Whoever wants to sign that dotted line and step in the ring with me,” Ennis said during his post-fight press conference. “Everybody knows I don’t got no picks. They can call me right now, and I’ll hop in the ring and fight tomorrow. …  I might have to be a mandatory challenger for one of the one world champions. Until then, I’m just going to keep working my way up to the world title and trying to fight the best fighters.”

For Ennis, it was his 17th knockout in his last 18 fights. His last two knockouts came against fighters who have never been stopped. In a fight that was billed as the most difficult test of his young career, Ennis came through in flying colors.

Switching back and forth from his conventional boxing stance to a southpaw one, Ennis methodically broke down the more experienced, 32-year-old Lipinets by tagging him with some body shots. By the third round, Ennis started throwing some vicious combinations to Lipinets head and the body and assumed complete command of the fight. In the fourth round, Ennis scored a flash knockdown.

In that decisive sixth round, Ennis caught Lipinets with a right hook to the jaw and then finished him with a vicious left uppercut that sent Lipinets to the canvas. The referee didn’t have to 10-count because Lipinets was out.

It was another fight for Ennis that didn’t go beyond the sixth round and the way he broke down Lipinets throughout the fight, it was a matter of time before Ennis would inevitably stop him.

“I knew it was coming, but I had to set it up, set it up. That’s what I was doing. I knew eventually that it would come, and it did come,” Ennis said. “I was breaking him down mentally and physically. I wasn’t the guys those guys (Lipnets) he fought. I can fight inside and outside.”

Ennis is not the type of fighter who is going to rest on his laurels. He said he’ll be back in the gym this week. The hope for Ennis is to fight for a world title sometime by the end of this year or the beginning of next year.

Either way, Ennis said he will be ready.

“As long as I keep fighting top guys and climbing up the ranks and getting better in each and every fight, that’s the goal to be a world champion,” Ennis said. “I feel like I will be a world champion by the end of 2021 or the beginning of 2022. Patience is the key.”