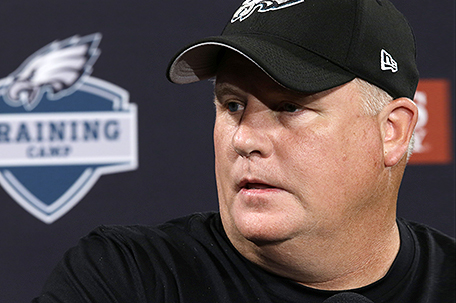 Just when you thought the Philadelphia Eagles were ready to turn the corner on what has been an up and down season, last Sunday’s mind-boggling 20-19 loss to the Miami Dolphins happened.

Because the Eagles have been unable to get out of it’s own way thanks to costly penalties, turnovers and other missed opportunities, another winnable game, and a potential tie for first place in the NFC East thanks to the New York Giants loss to the New England Patriots, went by the wayside for the 4-5 Birds.

“There’s been a lot of penalties, a lot of really dumb mistakes, mental mistakes, bad snaps, poor fundamentals,” said Eagles center Jason Kelce. “A lot of things that have culminated throughout the season, just inconsistent.”

But the good news is, thanks to the NFC East being a hot mess and the Giants having a bye this week, the Eagles have a shot of chipping into that lead.

This week, the Eagles will begin a stretch where they will play two games in four days. On Sunday, they take on the Tampa Bay Buccaneers (4-5) and rookie quarterback sensation Jameis Winston at Lincoln Financial Field. On Thanksgiving, they’ll hit the road to take on a 2-7 Detroit Lions squad that is coming off of an upset of the Green Bay Packers.

On the surface, you would think that these two games are winnable because the teams they’re playing aren’t that good. But most of us thought that about the Dolphins…and you see how that turned out.

The Eagles have played really well at times and quite dreadfully in others. For example, the Eagles had jumped out to a 16-3 lead in the first quarter, but went on the struggle for the next three.

In other words, this team is like Forrest Gump’s box of chocolates…you never know what you’re going to get.

This week presents even more uncertainty since starting quarterback Sam Bradford has been undergoing the league’s concussion protocol and is recovering from a sprain of the Grade AC joint in his non-throwing shoulder. Also, All-Pro left tackle Jason Peters didn’t practice due to a back injury.

While Bradford has yet to be officially ruled out for Sunday’s game, backup Mark Sanchez has been taking reps with the first-team. If Bradford can’t go on Sunday, Sanchez will start and third stringer Thad Lewis will be the backup.

When Bradford got injured in the Dolphins game, Sanchez stepped in and moved the offense well…until he tossed an end-zone interception. Because Sanchez is more mobile, and he makes pretty good decisions when he’s not tossing picks, he’s an ideal fit for Kelly’s read-option offense.

At this time last season, Sanchez took over for Nick Foles and played well except for his bad habit of throwing it to the guys in the wrong uniforms. Last season, the former Southern Cal star threw 14 touchdowns passes, but also threw 11 interceptions.  How does head coach Chip Kelly fix it?

“It’s a matter of putting him in situations in practice where we’re giving him the right coverages, the right schemes that he’s going to see and how he executes in terms of what he’s supposed to do compared to the play we’re running,” Kelly said.

Sanchez said he will be ready if he gets the call to start on Sunday against the Bucs. He said he can cut down on interceptions because of his familiarity with the offense.

“You just gotta be smart with the ball and understand the situation and what we can get at the time,” Sanchez said.  “We’ll do a good job of pushing the pace and analyzing where we’re at and what we can accomplish on a specific play.”