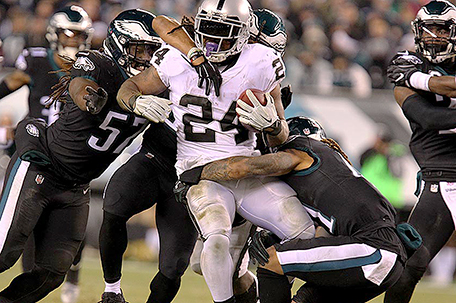 ABOVE PHOTO:  The Eagles defeated two weeks ago against the Raiders… can they beat the Falcons Saturday?  (Photo: Webster Riddick)

Despite being the number one seed with a 13-3 record, the Philadelphia Eagles are a two-point underdog to the sixth-seeded Atlanta Falcons in their NFC Divisional Playoff game on Saturday.

This perception, based mainly on the belief that next to no one believes that the team has a snowball’s chance in hell of winning with quarterback Nick Foles at the helm, has fans (and a few players) smarting a little.

The disrespect is real, and the Birds have had enough of it.

“It’s surprising … But we ain’t worried about underdog, overdog — none of that,” said Eagles defensive tackle Tim Jernigan. “It comes down to us versus them. You can’t shake it. You can’t look at it any other way.”

“I’m done talking about it. I don’t care nothing about Vegas and underdogs,” added Eagles wide receiver Alshon Jeffery.

Despite their denials to the contrary, the Birds are motivated by the apparent disrespect.

The team’s protestations notwithstanding, the perception of the Birds as a shaky number one seed comes from the fact that Foles hasn’t inspired a lot of confidence.

But Eagles head coach Doug Pederson said he and the rest of the offense have confidence in Foles’ ability to lead them against a Falcons defense that was ranked ninth against the run and 12th against the pass.

Pederson wants Foles to be himself, he said.

It’s not like the former Arizona star doesn’t have playoff experience. In the Eagles’ 26-24 loss to the New Orleans Saints back in 2013, Foles completed 69 percent of his passes and threw two touchdown passes and left the game with the lead before Saints quarterback Drew Brees drove his team to the game-winning field goal.

Meanwhile, Foles said having the last two weeks of practice has helped him to regain his focus and belief that he can lead this team to victory over Atlanta.

“I haven’t executed as well as I wanted to in the last couple of weeks,” Foles said. “Having this time to self-scout, go through practice and everything, you realize that you just go out there and play. Maybe I wasn’t do that as much in those games. It’s as simple as that. Sometimes, the hardest things are the simple things. Basically, get out of your own head and play the game you know how to play.”

What’s going to help Foles stay on his feet and have time to find receivers downfield is consistency in the running game.  The Eagles might have an advantage with Ajayi. When Ajayi was with the Miami Dolphins back in week five, he rushed for 130 yards on 26 carries. He averaged five yards per carry.

For the Birds to win this game, they have to establish a consistent running game against Falcons defense that’s going to have eight men in the box.

“We’re going to need our room (running backs) to produce. It’s been that way all year,” Ajayi said. “When we’re successful, the running back room is successful because we’re helping to keep the tempo of the game, keep the defense off the field, making big plays. That’s not going to change. All of us are going to be counted to make big plays.”

The Eagles and Falcons take the field at Lincoln Financial at 4:35 pm on Saturday.