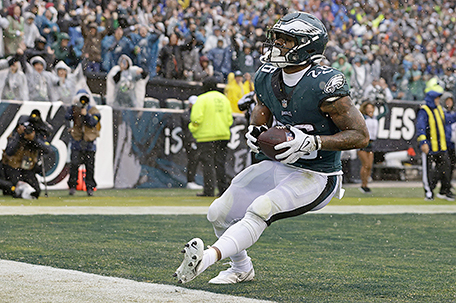 A great running game and a punishing defense helped the Philadelphia Eagles remain the lone unbeaten team in the National Football League with a win over the Jacksonville Jaguars on Sunday.

ABOVE PHOTO: Philadelphia Eagles running back Miles Sanders (26) scores a touchdown against the Jacksonville Jaguars during an NFL football game, Sunday, Oct. 2, 2022, in Philadelphia. The Eagles defeated the Jaguars 29-21. (AP Photo/Rich Schultz)

Whether it’s a wide receiver like A.J. Brown or Devonte Smith, tight end Dallas Goedert or quarterback Jalen Hurts, Philadelphia Eagles fans know that someone is going to stand out in the team’s passing game.

But on a rain-soaked Lincoln Financial Field on Sunday, the running game took center stage in the Eagles’ 29-21 win over the Jacksonville Jaguars. At 4-0, the Eagles remain the lone undefeated team in the NFL.

Led by Miles Sanders, who gained a career-high 134 yards on 27 carries with a pair of touchdowns, the Eagles collectively rushed for 210 yards on the ground on a day despite losing offensive linemen Jordan Mailata and Isaac Seumalo to injuries during the game.

Replacements Jack Driscoll and Sua Opeta kept the running game from missing a beat, something that made life easier for Sanders.

On a day that began with the home team finding themselves in an early 14-0 hole, the Eagles showed the world that they could take a punch with outstanding play on both sides of the ball, head coach Nick Sirianni said.

Hurts, the current NFC Offensive Player of the Month, agreed.

“I think being able to be multi-dimensional as an offense, having an identity of just executing with consistency,” he said. “Whatever is called, that’s what we go out there and try to do. The intent of what we want to accomplish may change. It’s about finding a way and all 11 doing their jobs.”

Jacksonville (2-2) punched the Eagles (4-0) in the mouth early on a 59-yard interception return for a touchdown by safety Andre Cisco. Hurts threw the ball behind wide receiver Zach Pascall. The deflection off Pascal’s hands was caught by Cisco who took it in for the score.

On their next offensive possession, the Jags drove 57 yards in seven plays to take a two-touchdown lead on a four-yard touchdown pass from quarterback Trevor Lawrence to wide receiver Jamal Agnew.

There was no panic on the Eagles’ sidelines because the defense did some punching of their own and held the Jaguars to just one score the rest of the way.

After the Jaguars rolled up 96 yards of total offense in the first quarter, the Eagles’ defense held Jacksonville to just 123 yards for the rest of the game. They sacked Lawrence four times and forced five Jaguars turnovers (four fumbles and an interception).

Two of those sacks and one of the forced fumbles were courtesy of defensive end Hasson Reddick. The former Temple University star forced the Lawrence fumble that sealed the game.

“We were on the sidelines saying it’s a lot of ball left,” Reddick said. “We knew the game was far from over and we just decided to go out there, work and dominate the men in front of us.”

While Lawrence struggled to hang onto the football for the Jaguars, Hurts, outside of the “pick-six” he threw in the first quarter, did a good job of protecting the football through a driving rainstorm. He completed 16-of-24 passes for 204 yards. He gained 38 yards on 16 carries with a three-yard touchdown run for the Eagles’ first score of the game.

“(Hurts) knows how important is to protect the football and he can do it because that’s such a key in winning and losing games,” said Sirianni, who had his two 2-year-old son, Miles, with him during his postgame press conference. “It was great that he was able to execute under the conditions we were in because it was messy out there.”

During his postgame press conference, Eagles head coach Nick Sirianni wore a blue and white Roxborough High tee-shirt to honor the five football players who were wounded in a shooting as they were leaving practice last Monday. One of the players, 14-year-old Nicholas Elizalde, was killed in the shooting.

“My heart goes out to them,” Sirianni said. “My thoughts and prayers go out to them.”

The Eagles will try and remain the NFL’s lone undefeated team when they take the field against a wily Arizona Cardinals squad on Sunday at 4 p.m. You can catch the game on Fox-29.