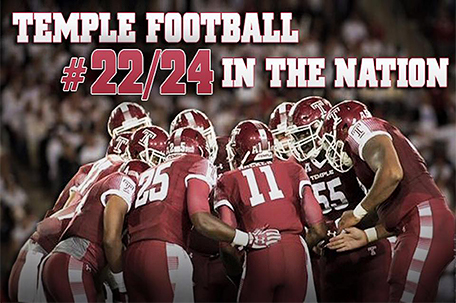 In the current Associated Press Top 25, The Owls (6-0, 3-0) are ranked 22nd, and are 24th in the USA Today Coaches Poll. It’s the first time in school history that Temple has been ranked in both polls.

While he’s glad to see that his team has made the rankings—the New York Times featured the team in a story on Thursday—they can’t let it go to their heads, said Temple’s head coach Matt Rhule.

Being ranked in national polls is nice. But to stay there, you have to keep winning, he said.

“It means that they’ve done right so far, “ Ruhle said. “To me, it has nothing to do with playing. We have a chance to win games when we play well. My focus is on playing well. Anything else is a distraction, but it’s a necessary distraction. It’s a worthwhile distraction, but I try as best I can to focus on winning games.”

This year, the Owls have shown that they’re capable of competing with anyone in the country on both sides of the ball.

On offense, Temple is scoring 33 points per game coming into Thursday’s game against East Carolina (4-3, 2-1). Dual threat quarterback P.J. Walker has been a nightmare for opposing defenses, passing for 1,063 yards with eight touchdown passes and three interceptions and being able to run when he needs to.

Running back Jahad Thomas has solidified his hold on the starting tailback position. Through six games, Thomas has gained 756 yards rushing and has scored 10 touchdowns. He is averaging 5.2 yards per carry.  He is also the team’s second-leading receiver with 15 receptions for 181 yards.

Defensively, Temple ranks seventh in the nation in total defense and eighth in scoring defense, allowing just 14.7 points per game. Linebacker Tyler Matekevich leads the team in tackles (52). The defense has also shown an ability to get to the quarterback, most notably in a 10-sack performance in its victory against Penn State.

If the Owls were somehow able to run the table, a task easier said than done with the Fighting Irish of Notre Dame set to invade Lincoln Financial Field next week, they still wouldn’t be heading to the College Football Playoff as one of the game’s Final Four because they’re not a member of one of the Power Five conferences. The best they can do is a berth in a New Year’s Day Bowl Game.

Unless the other group of five conference teams put a bunch of ranked Power Five schools on their schedules and beat them, teams like Temple, Houston or Memphis, will always get a pat on the back by playing in a major January bowl game and never get to compete for a national championship.

When you consider that one of the two losses suffered by the Southeastern Conference’s University of Mississippi came at the hands of Memphis, that seems kind of unfair, doesn’t it? When a team from the American Athletic Conference takes down a team from the supposed “best conference in college football”, shouldn’t they get some championship love?

If that’s not an argument for expanding the current playoff system, I can’t come up with one. When teams like Memphis, and Temple, who knocked off Penn State of the Big-10 this year, are being left out of a championship discussion, something’s wrong.

You have 10 Football Bowl Subdivision conferences.  In my way of doing things, you would have a 16-team playoff-with the automatic bids going to the conference champions and the sixth highest ranked teams by the national polls.

Even if you think that teams from the American, Sun Belt, Conference USA, or the Mid –American conference don’t have a chance of winning an early round playoff game with the big boys, they should still be given the opportunity to give it their best shot.  That they’re not is downright un-American.

But since the playoffs are what they are, the best the Owls can do is win the American Athletic Conference, and they’re in a good position to do that. The team has never won a conference championship regardless of what conference that’s been and it’s their singular focus so far this season.

It’s that focus that’s made them the team that everyone, including national pundits, wants to watch.