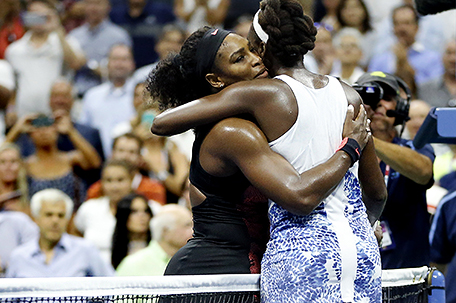 NEW YORK — Let everyone else go ahead and assume Serena Williams will beat Roberta Vinci of Italy in the U.S. Open semifinals.

Williams, at least publicly, is not taking anything for granted as she closes in on tennis’ first Grand Slam in more than a quarter-century.

When a reporter from Vinci’s country began a question with the phrase, “Even in Italy, we think she has no chance,” Williams tried to persuade him – and perhaps herself – that Thursday night’s result is not a foregone conclusion.

First, Williams pointed out that her most recent victory over Vinci, last month in Toronto, was “really tough, and I didn’t really expect that.”

That result made Williams 4-0 against Vinci, all in straight sets. Still, Williams continued, “I’m not going to underestimate her. She played really well. She’s not in the semifinals of a Grand Slam for no reason. She knows what to do and she knows what to play.”

Truth is, the 43rd-ranked Vinci doesn’t like her odds all that much, either. Aside from her head-to-head history against No. 1 Williams, this is the 32-year-old Vinci’s first semifinal in 44 career majors.

“Serena is Serena,” Vinci said, and later joked she might want to wear a helmet on court to protect herself from the American’s powerful shots.

“She’s the favorite. Maybe she’ll feel the pressure. Who knows?” Vinci said. “It all depends on her.”

That sure seems to be the case. When Williams is at her best, she’s as good as it gets now – and, some say, ever.

She is 53-2 in 2015, including 26-0 in Grand Slam matches as she tries to become the first player since Steffi Graf in 1988 to win all four major titles in one year. Williams’ overall Grand Slam winning streak is 33 matches, dating to the start of last year’s U.S. Open.

If she can collect a fifth consecutive major championship this weekend, Williams would raise her career total to 22, equaling Graf for the most in the Open era, which began in 1968, and second-most in history, behind Margaret Court’s 24.

The other semifinal will be No. 2 Simona Halep of Romania against No. 26 Flavia Pennetta of Italy. Pennetta is 3-1 against Halep, the 2014 French Open runner-up.

It’s the first time at any Grand Slam tournament since the 1982 U.S. Open that all four women’s quarterfinals went three sets, the WTA said.

Kvitova is one of the two women to beat Williams this season. The other, Belinda Bencic, lost to Venus in the third round last week. Azarenka, meanwhile, pushed Williams to three set before losing each of their last four Slam meetings, including at the French Open and Wimbledon this year, and the 2012 and 2013 U.S. Open finals.

Looking ahead, if she beats Vinci, Williams would take favorable head-to-head records into a possible final against Halep (6-1) or Pennetta (7-0).

Asked whether he is worried about anything as Serena approaches the semifinals – and history – Mouratoglou responded: “I don’t have any concern, because I see she’s exactly where I expect her to be, mentally, physically and tennis-wise.”