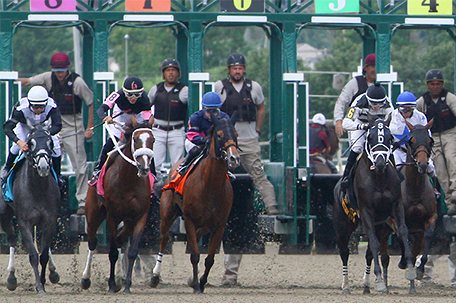 ABOVE PHOTO: Horses and riders as the derby begins.

Over 10,000 fans lined up outside Parx Racing, flooding the entrance and racing to grab a highly-coveted seat at one of the tracks’ umbrella-covered picnic tables – complete with a grilling station.

The Pennsylvania Derby is a free family-friendly event which featured 10 high-stakes races creating an invigorating day at the track.

Derby attendees had the opportunity to enjoy the Bigg Romeo band, pony rides, a selection of food trucks, a virtual reality experience provided by the Pennsylvania Horse Racing Association, and various giveaways and sweepstakes.

Parx Racing’s Annual bet Parx Pennsylvania Derby brings top thoroughbred horses and jockeys from across the country to Parx Racing offering something for everyone and is a memorable  day at the races.

On the other side of town, more than three thousand people, some who’ve traveled from other states and countries,  gathered to cheer on notable and few of the world’s most esteemed polo players during the Work to Ride’s First Annual Philadelphia Polo Classic, the first of its kind urban polo.

The Philadelphia Polo Classic featured professional-level polo and is set to be one of the city’s most iconic events in which 100% of proceeds will go to support the growth of the Work to Ride program.

The event centered around two Polo matches, culminating with a feature match that included star-studded teams of elite polo players who  faced off to compete for the championship title.

Philadelphia’s own Kareem Rosser, an alum and current board member of Work to Ride and captain of the first all-Black team to win the National Interscholastic Polo championship, served as a team captain for the match.

Captaining the opposing team was professional polo player, and Rosser’s former BlackWatch Polo teammate, Nacho Figueras, who is widely considered to be one of the best polo players in the world.