Turnovers cost the Eagles again in another loss vs Browns 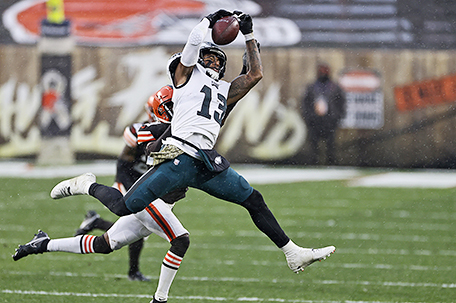 ABOVE PHOTO: Philadelphia Eagles wide receiver Travis Fulgham (13) catches a pass during the second half of an NFL football game against the Cleveland Browns, Sunday, Nov. 22, 2020, in Cleveland.  (AP Photo/Ron Schwane)

It’s a recurring theme in a season that is spiraling downward.

Carson Wentz threw a Pick-6, got sacked for a safety and the offense committed two turnovers inside Cleveland’s 10 in a 22-17 loss Sunday.

Wentz was sacked five times, got hurried and hit numerous times and threw two more interceptions, increasing his NFL-leading total to 14. He also tossed a pair of touchdown passes.

Miles Sanders fumbled at the Browns 4 on a first down on Philadelphia’s opening drive.

“We are where we are because of the mistakes we’re making, coaches and players,” Eagles coach Doug Pederson said. “This is a test to see who’s in, who’s out. That’s where we are. It’s a matter of challenging the leadership of the football team, challenging the guys to keep things together. We still have an opportunity in our division.”

“If you get to that spot, you’re sending the wrong message to your football team that the season is over and that’s a bad message,” he said. “We have to work through this. When times get tough, sometimes that might be the easy thing to do. This business is about work. This business is about detailing, having ownership. It’s not one guy. This sport is bigger than one guy. We all have a hand in it. We all have to fix it.”

Wentz got hit on a blitz and fluttered a pass that was intercepted by second-year linebacker Sione Takitaki and returned 50 yards for a score in the first half.

He threw a pick late in the fourth quarter on a pass intended for Alshon Jeffery, who jumped way too soon and allowed the ball to sail right into Denzel Ward’s hands.

“I’m trying to be smart and all that but when I see a guy open, I’m cutting it loose,” Wentz said. “I’m not hesitating. They made plays. Hats off to them.”

Philadelphia’s offensive line didn’t give Wentz much time to throw except on his 19-yard TD pass to Richard Rodgers that tied the game in the third quarter.

Nine-time Pro Bowl left tackle Jason Peters was beaten by Olivier Vernon for three sacks and finally went to the bench only because of an injury. Right tackle Lane Johnson injured his shoulder and didn’t finish. Even center Jason Kelce, one of only two players on offense along with Wentz to start every game, was sidelined briefly by an elbow injury.

“Anytime you have as many moving pieces as we’ve had, it’s a challenge,” Pederson said.

Sanders finished with 66 yards rushing on 16 carries. He had 63 yards in the first half.

“There’s no quit in us,” Sanders said. “We still have a lot of football left but time is running out. We have to get this thing right. Soon. Fast.”