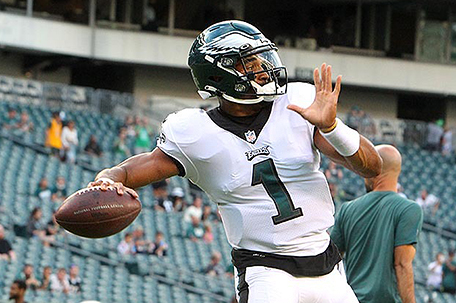 Because Philadelphia Eagles quarterback Jalen Hurts sitting out of last Thursday night’s game against the New England Patriots at Lincoln Financial Field due to a stomach bug, the 35-0 blowout wound up giving the fans gathered for the game a migraine.

But as the team prepares to take the field at MetLife Stadium for their final preseason game of the year against the New York Jets, hope springs eternal.

Last week, Hurts was sent to the hospital, treated, and released, which allowed him to miss the abysmal play of backups Joe Flacco and Nick Mullens, something that would have probably exacerbated his stomach troubles.

Though he was on the field for pregame warmups, head coach Nick Sirianni said Hurts had been experiencing pain in his abdomen.

“He wasn’t feeling great when he came in,” Sirianni said. “We put him through pregame warmups …He came back in, and he still wasn’t feeling good, and we evaluated him. We decided that it wasn’t in his best interest to play with what he was feeling. He’s doing okay.”

In addition to Hurts not playing, the Eagles starting defensive line and cornerback Darius Slay were also conspicuous by their absences, turning the contest into your typical preseason game.

Neither the offense nor the defense—whether on the first, second, or third string, distinguished themselves well after a week of doing well during joint practices with the Patriots.

To say Sirianni was unhappy about the team’s performance in its second preseason game was an understatement. The inconsistency was a dealbreaker, he said.

Wide receiver Devonta Smith, the Heisman Trophy winner that was the Eagles first-round pick. was targeted four times and caught two passes for 19 yards.  Running back Miles Sanders also made his 2021 preseason debut with two carries for 13 yards.

Smith, who is coming off a knee injury, said it was good for him to be out in the field after missing time.

But while Smith might have started getting comfortable, the team seemed kind of out of it.

On the third play of the game, rookie center Nate Herbig snapped the ball over Flacco’s head and the Patriots recovered at the Philadelphia nine-yard line.  Two plays later, the Patriots got a five-yard run by running back Damien Harris to take a 7-0 lead.

The Patriots, under both Cam Newton and former Alabama quarterback Mac Jones, led a pair of touchdown drives to give New England a 19-0 lead at halftime.

If you’re somehow not convinced that Hurts is your number one quarterback, watching Flacco run the offense in the first half left no doubt. The Birds offense came close to scoring only once, getting to the Patriots nine-yard line.

Instead of kicking a field goal on fourth and three, the Eagles were turned away when Flacco threw into double coverage and the ball was broken up by Patriots’ safety Kyle Dugger in the end zone.

Flacco, who will be the Eagles backup quarterback should something happen to Hurts, completed 10-of-17 passes for 83 yards with one interception and one sack. My guess is that this fact will lead a lot of Eagles fans to visit their local houses of worship to pray for a healthy season for Hurts.

Overall, it wasn’t a good night for the Eagles’ backups because they couldn’t score, and they couldn’t stop the Patriots from scoring. It was one of those nights that the backups and newcomers should be a little nervous about their chances of staying with the team.

They’ll get the chance to prove their worth in East Rutherford against the Jets, who have been practicing with the Eagles in a set of joint training camp practices this week.

Getting in shape for another season…Eagles first day training camp