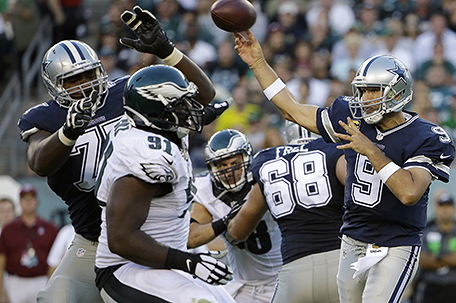 The new-look Philadelphia Eagles are 0-2 with an offense that’s bringing new meaning to the term.

When Philadelphia Eagles head coach Chip Kelly shipped LeSean McCoy to the Buffalo Bills, Nick Foles to the St. Louis Rams and gave an unceremonious heave-ho to Pro Bowl offensive guard Evan Mathis, the warning from fans and the media was “You’d better replace them with something better…”

Did the Birds do that?

If the last two games are any indication, the answer has to be an emphatic Hell No!

After a heartbreaking loss to the Atlanta Falcons and the debacle that was last Sunday’s loss to the Dallas Cowboys, the Eagles are hoping to redeem themselves on Sunday at MetLife Stadium when they take on a 2-0 New York Jets squad.

The big question that everyone is asking now is whether or not the Eagles offensive line can protect quarterback Sam Bradford and open up the kinds of holes that will allow running back DeMarco Murray, who was held to two yards on 13 carries and has only 11 yards after two games this season.

The Eagles offensive line got beat down by the Cowboys front seven that had seven tackles for a loss of yardage.  A quick Dallas defense outmuscled center Jason Kelce, guards Allen Barbre and Andrew Gardner and tackles Jason Peters and Lane Johnson.

On a running play late in the first quarter, Murray lost two yards when Cowboys defensive tackle Terrell McClain got into the Eagles backfield by slicing between Kelce and Gardner. The penetration forced Murray to go right where he was taken down by linebacker Sean Lee.

Perhaps the most blatant example of how poorly the offensive line performed in the running game was the Eagles first possession of the third quarter.  On first and 10 from the Birds 32, Dallas defensive end DeMarcus Lawrence streaked past tight end Brent Celek and dropped Murray for a six-yard loss.

On the next play, Cowboys defensive end Jeremy Mincey sped past Peters and tackled Murray for a loss of another five yards.  No matter how you slice it, Dallas owned the trenches and the Eagles didn’t.

“There were a couple times …  when the linebacker level would shoot through and then kind of disrupt and knock our guys off of our double teams,” said Eagles offensive coordinator Pat Shurmur.  “Then there were other times when we got split, whether it be the double team or the edge block with the tight end.  So there was no consistent one reason.  It’s just areas where if we just block better, I think we’ll get it fixed.”

With an even better Jets defense on the horizon, the Eagles have to do something, anything to fix the offensive line.

“We just couldn’t get things going at different times. We have to be better, no matter what the play calls are,” Murray said after the game.  “I think individually and collectively, as an offense, we have to look at ourselves in the mirror, watch the film and go on from there.”

The Eagles coaches have been saying that their issues in the offensive line can be fixed by the offensive line simply executing and doing their jobs.  I don’t know if it’s really as simple as that.  Not the way they were dominated by Dallas.

I don’t pretend to be an offensive coordinator, but from what I saw on the film, the Cowboys had the Eagles number. Usually, when the middle is jammed in Kelly’s offense, the running backs can find a cut back lane and bounce it to the outside.

The Cowboys, especially linebacker Sean Lee, had the edges covered. Lee had two tackles for a loss as a result. It was that kind of a day for the Eagles.

Now Kelly has to figure out a way for his offense to get its mojo back because if it doesn’t, it’s going to be a long year for Eagles fans.