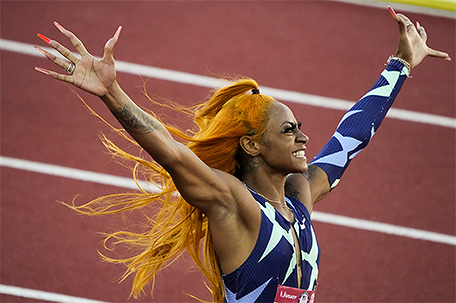 In 2016, I proclaimed it the year of Black Girl Magic in the world of sports because Black women from all over the diaspora excelled in several sports, most notably at the 2016 Olympic Games in Rio De Janeiro, Brazil.

Also, Ashleigh Johnson was the goalie of a U.S. women’s Water Polo team that won the gold medal and Ibithaj Muhummad, the first American Olympian to compete while wearing a hijab, won a bronze medal in fencing and showed America that the sport wasn’t just for prep schoolers anymore.

During the 2016 Olympics, women of African descent from the U.S., the Bahamas, Colombia, and the African continent won gold medals in all but three events, a sure sign that Black Girl Magic was in full effect.

But as the 2021 Olympics in Tokyo approach in less than 20 days, the feeling that an effort has been made to tamp down “Black Girl Magic” seems to have risen, thanks to controversies that are keeping some high-profile Black women from competing in this year’s games.

The most high-profile exclusion from the Olympics is that of U.S. sprinter Sha’Carri Richardson, who won the U.S. Olympic Trials in the 100-meter dash, suspended by the U.S. Anti-Doping Agency (USADA) for testing positive for marijuana. She was suspended for 30 days and won’t be going to Tokyo at all due to not being selected for the 4X100 meter relay team.

There are a couple of things that bother me about this suspension. One, studies show that marijuana isn’t a performance-enhancing drug. Two, the official reason she was suspended is that according to the World Anti-Doping Agency “THC is a “Substance of Abuse” because it is frequently used in society outside the context of sport.”

Hmm… isn’t alcohol frequently used in society outside the context of sport? So, if Richardson dealt with the grief and trauma of her mother’s death, which she was informed of by a reporter, by drinking a pint of Hennessy, she would be on the team.

Then there’s the curious case of 2016 100-meter hurdle gold medalist Brianna McNeal, who also qualified for this year’s Olympics only to be banned by the Athletics Integrity Unit, the anti-doping arm of World Athletics.

McNeal received a five-year suspension for tampering with a drug test. In January 2020, McNeal missed a drug test after having an abortion. The AIG’s tribunal hearing contended that she falsified papers to avoid being penalized. McNeal also claimed that the procedure left her depressed and disoriented and she changed the date by mistake.

In an Instagram post last week, McNeal wrote that was she being “excommunicated from the sport as if I was shooting up drugs my entire career… where are the people that are supposed to protect athletes that are doing the right things and find themselves in human mistakes?”

Then, you have the cases of African track stars Caster Semenya of South Africa, and Namibian runners Christine Mboma and Beatrice Masilingi who were barred from the 400-meters for naturally producing too much testosterone.

The justification for the test was a 2017 study conducted by the IAAF that concluded that elite women runners with high testosterone levels performed 3% better than women with the lowest levels. That study was published in the British Journal of Sports Medicine.

However, sciencedaily.com also reported that researchers at the University of Colorado challenged the IAAF study and concluded that their study was flawed and did not prove that higher testosterone levels in women provided any competitive advantage for women with higher testosterone.

In other words, these women are being denied the right to compete due to flawed data. To me, this calls the whole testing process into question and makes me wonder if anyone is minding the store here.

In fact, denying athletes the opportunity to compete without definitive scientific proof, regardless of race, is just wrong.

FINA said in a statement that the “shape and configuration” of the cap, which was designed by a British, Black-owned company called SOUL CAP, was unnecessary and that to their “best knowledge, the athletes competing at the International events, never used, or were required to use, caps of such size and configuration” and that the caps “don’t follow the natural form of the head.”

Or put another way, because White girl’s hair don’t grow that way, this can’t be “natural.”

Tell that to all of the Black female competitors currently lighting up the sport. Toks Ahmed, and Michael Chapman, who partnered with Alice Dearing, the first Black British swimmer to qualify for the Olympics to create Soul Cap, told In-Style magazine that FINA failed to “acknowledge the diversity of competitive swimmers.”

FINA’s reaction brought back memories of the difficulties that Dawn Butler, a Black member of Britain’s House of Commons, had while swimming as a child.

“I remember trying really hard to get my hair into a swimming cap when I was younger, it was one of the reasons I didn’t like going swimming,” Butler said. “There is no way my hair can fit into [a] ‘standard’ ‘normal’ cap. It’s discrimination in plain sight.”

“FINA is currently reviewing the situation with regards to ‘Soul Cap’ and similar products, understanding the importance of inclusivity and representation,” the statement read.

Athletes hoping to represent their countries in Olympic competition understand that every move they make is going to be scrutinized.

But as the Tokyo games approach in 20 days, I can’t help but think that Black women have been looked at harder than usual.

Swim caps for thick, curly hair not allowed at Olympics