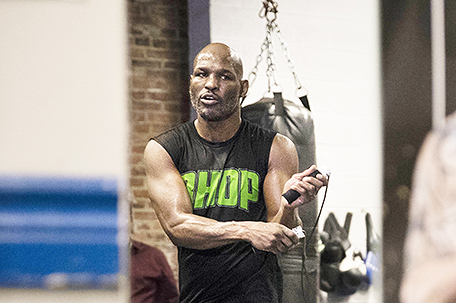 ABOVE PHOTO:  Bernard Hopkins jumps rope during a media workout in Philadelphia, Monday, Dec. 5, 2016. Hopkins fought Joe Smith Jr., in a light heavyweight boxing match on Dec. 17 at the Forum, in Inglewood, Calif. He lost to Smith by TKO in the 8th round.  (AP Photo/Matt Rourke)

When Bernard Hopkins was literally knocked out of the ring last weekend, “Father Time” continued his own undefeated streak.

About 10 years ago, I did a phone interview with former HBO boxing analyst Larry Merchant as part of my coverage of the International Boxing Organization light heavyweight title fight between Philadelphia boxing legend Bernard Hopkins, who was 40-something at the time, and a younger, faster Antonio Tarver.

At the time, I thought that Father Time would keep Hopkins from winning that fight and asked Merchant what it might finally take to convince Hopkins to finally retire from the ring. In order for him to do that, Merchant said, someone would have to “beat him up”.

It took another 10 years, but last weekend it happened.

After a successful career of standing toe-to-toe against a combination of Father Time and guys half his age, Bernard Hopkins finally got “beat up”. In what is hopefully the final fight of a Hall of Fame career, Hopkins lost to light heavyweight contender Joe Smith Jr. by TKO in the eighth-round.

The outcome of the fight was about as embarrassing as it was sad for the now 51-year-old Hopkins as his much younger opponent literally knocked him out of the ring. With that, Father Time helped add Hopkins to the long list of legendary pugilists who mistakenly believed that greatness is immortal.

With all due respect to the man who once dominated the middleweight division and has won a few titles as a light heavyweight, Hopkins looked exactly like the elderly, 50-something fighter he is as Smith pummeled him all over the ring.

It reminded me of the reasons why I refused the offer of a ticket to a closed circuit screening of the Muhammad Ali/Larry Holmes fight in 1981. I couldn’t stand to see a great fighter when he wasn’t great anymore. If I had gone to that fight, the guys would have been called me an oversensitive punk because I would have been crying like a baby.

It was the same way with Sugar Ray Leonard when he lost to Terry Norris. I’ve also seen film of guys like Sugar Ray Robinson and Joe Louis fighting when they were well past their prime. It’s often sad and hard to watch because you remember when they were kings and when were so invincible in the conquest of their opposition.

Hopkins needed to go out as a conquering hero the way former Baltimore Ravens linebacker Ray Lewis did when he led the Ravens to the Super Bowl back in 2012. Instead, Hopkins took to the ring as a shadow of his former self and showed that he just didn’t have it.

On one hand, you have to admire Hopkins for doing something he loves even at his advanced age. He was beating up younger guys when he was in his 40s, which further cemented his legend. He had overcome the rough streets of North Philadelphia, a stint in Graterford Prison and a host of other challenges to become one of the best pound-for-pound boxers in the history of the sport. He was on his way to being a first-ballot Boxing Hall of Famer even without the victories he had as a 40-year-old man.

He has nothing else to prove, and I hope that if nothing else, Hopkins most recent defeat shows that to him. He doesn’t need to humiliate himself like that again.

Given what happened to Ali when he hung around too long, it might be time that Hopkins stops hanging on to his youth and allows himself to live in our memories as one of the greatest boxers of all time.