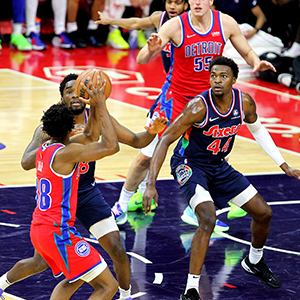 PHILADELPHIA (AP) — For a team that scuffled this season on the road, the Oklahoma City Thunder sure did look like a playoff team in Philly.

Shai Gilgeous-Alexander scored 37 points and Josh Giddey had 20 to lead the Thunder to a 133-114 win over the Philadelphia 76ers on Thursday night.

“I think it shows we belong,” Giddey said. “We’ve shown we belong with some of the best teams in the league.”

They got a little bit of something from everyone. Jaylin Williams and Tre Mann each scored 14 points.

Oklahoma City also avenged a 19-point loss to the 76ers on Dec. 31, and came back strong after a one-point loss Tuesday at Miami.

“We attacked and were appropriately aggressive,” coach Mark Daigneault said. “I just think we’ve got to be that team. Trust that.”

Embiid got to work late in the fourth to give the Sixers a shot. The reigning NBA scoring champ dunked. He bullied his way toward a bucket. He sank a couple of free throws. OKC’s lead shrunk and Philly fans got loud.

The Thunder stood their ground. They made 31 of 33 free throws and sealed the win from the line down the stretch.

“There’s just times where things get tight and you kind of naturally drift from your identity,” Daigneault said. “I thought the difference was, when it got tight, I just thought we got closer to our identity. Closer to team basketball. That’s a sign of a team that believes in what they’re doing.”

The plucky Thunder scored on eight straight possessions in the third — getting a 3 from Mike Muscala — to take an 85-78 lead. They even bounced back when blocked, as in, a monster Embiid rejection that got fans to their feet. No worries. The Thunder retained possession and Mann buried a 3. Muscala’s second 3 of the quarter made it 97-80.

Just two days after the 76ers thumped Detroit by 31, they let the Thunder shoot 54% in the third. The Thunder, who had the youngest roster in the league on opening night, led 101-85.

“We’re a good defensive team, but we did not defend tonight,” 76ers coach Doc Rivers said. “I guess the one common theme overall is just getting beat off the dribble into the point. On those nights, we struggle. Honestly, on those nights, every team struggles. They got into the paint over and over again.”

The Thunder showed why — even under .500 — they’re at least sniffing a playoff run. They hit 8 3s the first half and Gilgeous-Alexander scored 17 points as they built a 15-point lead. Embiid played only 10 minutes because of foul trouble.

“I think the competitiveness of the team has come from our players and our locker room,” Daigneault said. “Those guys are ambitious and they’re willing to do it together. When the ball goes up most nights, they’re ready to compete.”