Thud! Phillies win streak comes to an end in loss to Dodgers 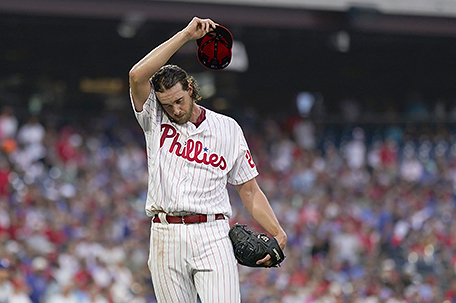 ABOVE PHOTO: Philadelphia Phillies starting pitcher Aaron Nola wipes his face after pitching during the second inning of a baseball game against the Los Angeles Dodgers, Tuesday, Aug. 10, 2021, in Philadelphia. (AP Photo/Matt Slocum)

In the Battle of the Bullpens, the Los Angeles Dodgers pen came out on top.

For the first three and one-third innings, the fans at Citizens Bank Park that witnessed Tuesday’s game between the Phillies and the Los Angeles Dodgers were treated to the kind of pitcher’s duel that you might see during the postseason.

But thanks to a one hour and 44-minute rain delay, both Nola and Scherzer saw their nights end early and the game turned over to both bullpens.

“I felt pretty good tonight,” Nola said. “I felt like I was on top of them tonight. My two-strike pitch was working pretty well tonight. But it was obviously shorter than I would want to. … I was ready to go back out, but the two-hour mark was a pretty long stint.”

Unfortunately, when it came to a Battle of the Bullpens, the Phillies were on the losing end. Add a distinct lack of offense on the part of the Fightin’s, and you get the Dodgers snapping the Phillies eight game winning streak with a 5-0 shutout.

“That’s probably as good of stuff that’s Aaron has had all year long,” said Phillies manager Joe Girardi.  “It’s frustrating but it’s Mother Nature. It’s not much that you can do about it, but we still had some opportunities, but we couldn’t come up with the big hit like we’ve been able to as of late. But it’s unfortunate the rains came.”

Girardi said the good news about Nola’s short-lived outing Tuesday night was that he had good command of his curve ball along with his fastball.

“I thought it was the best curve ball he’s had all year long,” Girardi said. “They (the Dodgers) were swinging through it. He was throwing strikes with it. He was doing whatever he wanted it with it. This is a lineup that doesn’t necessarily strike out a lot and he was doing a real good job.”

The Phillies bullpen gave up five runs on 11 hits after Nola’s departure from the game after the long rain delay while only getting four hits off of six Dodgers relievers.

The Phillies offense which had been so good coming into Tuesday night’s game could not get anything going against Scherzer or the rest of the Dodgers bullpen. The Phillies were 0-for-5 with runners in scoring position and got six hits that lead to no runs.

Notes: The Phillies will be getting back Andrew McCutchen from the 10-day disabled list on Wednesday, Girardi said before Tuesday’s game.