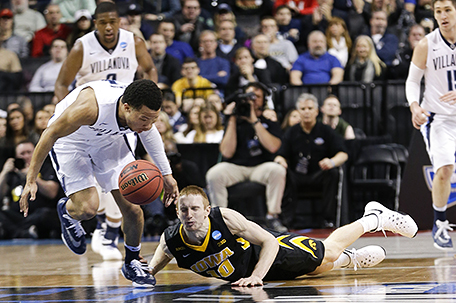 While hometown favorite Villanova will be playing its NCAA Tournament games in Louisville, Philadelphia’s College Basketball fans will still have reasons to cheer if history is any guide.

The City of Brotherly of Love will be at the center  of the NCAA Tournament Sweet 16 universe this  weekend.

The Wells Fargo Center will host the East Regional semifinals and finals on Friday and Sunday to determine which team will go to the Final Four to be played in April 2 at Reliant Stadium in Houston.

But before things tip off at the Center, Villanova the No. 2-seed in the South Region took on the South region’s No. 3-seed, the University of Miami Hurricanes (27-7) Thursday night in the regional semifinals in Louisville. It was the first Sweet 16 appearance for the Wildcats since 2009 when the team went to the Final Four. That game hadn’t been played at press time.

If the Wildcats are victorious over Miami, they would face the winner of the game between the South’s No. 1-seed, the Kansas Jayhawks and the Maryland Terrapins, the region’s No. 5-seed in Saturday’s South Regional Final.

Friday night at the East Regional will be a ACC-Big Ten Challenge. In the first game, the Fighting Irish of Notre Dame, the region’s No.6 seed, will take on the 7th seeded  Wisconsin Badgers. The nightcap will feature the East’s No. 1 seed North Carolina Tar Heels vs the 5th ranked Indiana Hoosiers.

Though most of the fans coming to the Wells Fargo Center to  see Friday’s set of games, they were no doubt hoping they could see the Wildcats make their bid for the Final Four right here in the city. Some college basketball experts believed that had Villanova won its conference tournament, their Sweet 16 games would have been home games.

But the fact that there will be no home teams on the floor at the Wells Fargo Center isn’t going to take away from the excitement and the promise of great basketball that awaits those coming to the East Regional. In the storied history of the NCAA Tournament, South Philly has been the scene of the sport’s greatest moments.

Perhaps the most memorable NCAA Tournament Philadelphia moment occurred back in 1992 when Duke and Kentucky played each other in the East Regional final at the old Spectrum a little under a 100 yards away from the Well Fargo Center.

In a 1992 Regional Final game at the Spectrum that went to overtime, Duke’s Christian Laettner took a long pass from teammate Grant Hill and hit the game-winning shot against the Kentucky Wildcats with time running out. It  was a dramatic ending to a game that several lead changes and more ebbs and flows than a Russian novel.

Two of the teams playing in one of Friday’s East Regional semifinal-Indiana and North Carolina played in the 1981 national championship on the same day that President Ronald Reagan was shot.  In that game, fans saw the rise of a young Isaiah Thomas, who was the most outstanding player of the Final Four that year.

Philadelphia was also the final destination for the 1976 Indiana team that not only won the national championship, but also finished the season unbeaten. It was the last time a Division One college basketball team finished the season without a loss.

In the 1980 East Regional semifinal, Georgetown came of age by beating crosstown D.C. rival Maryland and advanced to the Elite Eight. The Hoyas had beaten Terrapins earlier that season, but no one gave them a chance to win the rematch at the Big Dance.

Not only did Georgetown win the rematch, but it also put head coach John Thompson and the Hoyas in the national spotlight for the first time.