The Underdog’s On Top 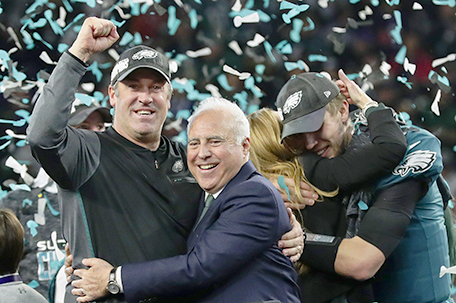 The Philadelphia Eagles grind their way to their first Lombardi Trophy.

MINNEAPOLIS—Throughout the 2017 season, the Philadelphia Eagles have had faced more than their share of adversity.

From a raft of injuries that would have made even the best team think this wasn’t their year to the ridicule of experts who doubted they’d get through the Divisional Round of the playoffs despite being the top-seeded team in the NFC, the Eagles have had to embody the saying “We’re all we got. We’re all we need.” 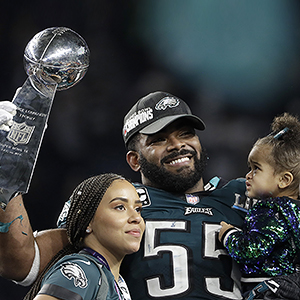 “We lost an MVP candidate quarterback (Carson Wentz), we lost a Hall of Fame left tackle (Jason Peters), a Hall of Fame running back (Darren Sproles), and one of the best linebackers in the in the league in Jordan Hicks,” said running back LeGarrette Blount. “We just kept grinding.”

On Sunday night in Minneapolis, the Eagles let the NFL, the national media, and most importantly, the team’s fans know that this group of underdogs is on top by defeating the favored New England Patriots in Super Bowl LII by a score of 41-33.

And like Blount, who rushed for 90 yards and one touchdown while defeating his former team, said, the team had to keep grinding for this win.

The backup quarterback most of the nation had no confidence in, the Eagles Nick Foles, took home the Most Valuable Player trophy for a performance for the ages that included three touchdown passes and one touchdown reception. More on that later. 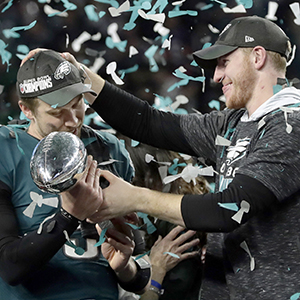 The ability that the Birds have shown all season to take a punch and keep moving forward came in handy on Sunday because they were taking on the Ivan Drago of quarterbacks, the Patriots’ Tom Brady, and he and coach Bill Belichick were going to keep punching.

Twice in the final quarter, they had to face the Brady onslaught, which included 505 passing yards and three touchdowns. The man seen by some as the greatest to ever play the game was having a Super Bowl for the ages and was simply killing the Eagles defense throughout the second half. 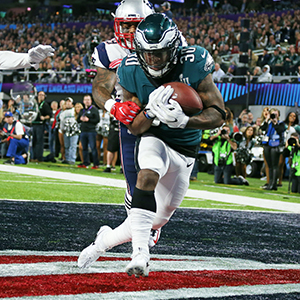 Philadelphia Eagles running back Corey Clement (30) catches a touchdown during the third quarter of Super Bowl LII between the New England Patriots and the Philadelphia Eagles held at U.S. Bank Stadium in Minneapolis, Minnesota on February 4, 2018.
(Tom DiPace via AP )

After being torched by Brady who passed for a Super Bowl-record 505 and three touchdowns and giving up a Super Bowl record 613 yards, the resilient Eagles defense had their finest hour late in the game and came up with two of the most important stops in franchise history.

Protecting a slim 38-32 lead, Brady had the ball with one time out and the two-minute warning to work with. There was no reason to believe that he wouldn’t put up more points for his team because up to that point in the game, the Patriots had scored on every drive in the second half. Back home, fans were just waiting for the other shoe to drop.

But that was before Eagles defensive end Brandon Graham said, “Not today, son. Not today…”

In what had been a frustrating night for the Eagles vaunted pass rush, Graham bulled his way past Patriots guard Shaq Mason and stripped Brady of the ball.  Rookie defensive end Derek Barnett recovered it and Birds kicker Josh Elliott went on to kick a 46-yard field goal that increased the lead to eight points.

“We had to go out there and make a stop and I’m just happy it happened when we needed it most,” Graham said. “Tom Brady’s arm just happened to be there and I swiped. And I didn’t realize I got it until I saw Derek Barnett pick it up.”

Brady and the Pats still got the ball with a little over a minute left, but with seconds left in the game and 91 yards to go, he got as far as midfield before throwing a desperation pass that fell harmlessly to the ground as time ran out. 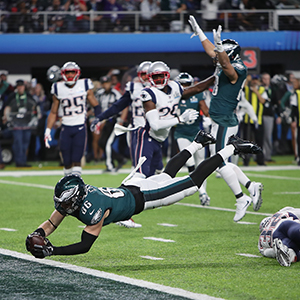 If anything, the last two defensive stops were reflective of the Eagles ability to keep fighting in the face of adversity. When things seemed dark, the Birds found a way to fight back.

But before the defense made that play, the team’s offense, using what it learned from watching the Atlanta Falcons snatch defeat from the jaws of victory to these same Patriots during last year’s Super Bowl, hopped in the car, put its foot on the gas, and never looked back.

Foles passed for 373 yards and three touchdowns. He was also an integral part of a play that Eagles fans in particular, and football fans in general, will be talking about for a long time.

With 34 seconds left in the first half, the Birds faced a fourth and one at New England’s one-yard line. The safe play would have been to kick the field goal. But Pederson would have none of that. Foles scored a touchdown pass from tight end Trey Burton, who got the ball from running back Corey Clement, who got the ball on a direct snap from center.   That play gave the Eagles a 22-12 lead at the half.

“We call it, ‘the Philly Special,’” Pederson said. “That play we’ve been working on for the last couple of weeks, and just needed the right time, the right opportunity, and the guys executed it brilliantly.”

When he took to the podium following the game, Foles talked about his team’s ability to believe in itself and him when no one else did. 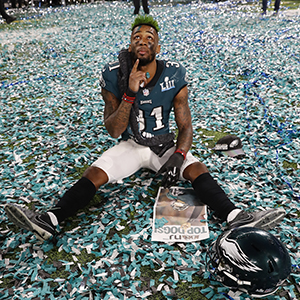 From beginning to end, Pederson and offensive coordinator Frank Reich aggressively played to win. Every New England score was answered with a score of its own.  For example, when the Patriots took the lead late in the game, the Eagles came right back and drove 75 yards and 14 plays, culminating in an 11-yard touchdown pass to Ertz for what turned out to be the game-winner.

The City of Philadelphia has been in full-on celebration mode since Brady’s Hail Mary hit the ground. On Sunday night, fans took over Broad Street and gathered outside City Hall. On Thursday, millions crowded onto Broad Street and onto the Benjamin Franklin Parkway for a victory parade that generations of fans took the day off from work for. We’ll have the sights and sounds from that parade in next week’s SUN.

In a season where no one expected much that ended in a way that no one could have predicted, the Eagles gave their fans a Hollywood ending.

Which is why it makes sense that Eagles center Jason Kelce used a quote from one of the city’s favorite fictional characters, Rocky Balboa, to sum things up.

The Philadelphia Sunday Sun’s coverage of Super Bowl LII is sponsored by Tyler Made Media, producers of “Mark and Denise In The Mornings” on Mondays, Tuesdays and Wednesdays from 7am to 9am on WWDB-860FM.