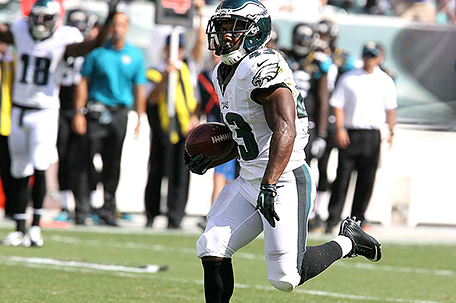 ABOVE PHOTO:  Eagles running back Darren Sproles ability to make plays in space has helped the Eagles to a 2-0 record.  (Photo by Webster Riddick.)

Philadelphia Eagles running back Darren Sproles is giving opposing defensive coordinators something to think about.

For the second straight week, the Eagles fought their way back from a two-touchdown deficit.

And the team has the speed of Darren Sproles to thank.

The diminutive running back has become a nightmare for opposing defenses whose speed has put opposing defenses on notice. Sproles has the ability to score from the backfield, as a receiver or even as a kick or punt returner.

In fact, the playmaking ability of the former Kansas State star was responsible for the three scoring drives that helped the Eagles defeat the Indianapolis Colts on Monday night.

While he only crossed the end zone once, Sproles put the Eagles in position to score for the other two scores. He accounted for 178 of the Eagles 458 net yards– seven receptions for 152 yards and four carries for 26 yards—a total that included two receptions for over 50 yards.

“He’s just a special player,” said Eagles head coach Chip Kelly. “The first day we had him it was, ‘How many different ways can find ways to get him the football?’ He’s just a dynamic football player.”

Sproles 19-yard touchdown run tied the game at 20-20 late in the third quarter. But it was his last two receptions that set up the Eagles last two scores that made the difference in the game.

With 4:25 left in the game and the Birds trailing 27-20, the Eagles had a second and 10 from their own 43. Quarterback Nick Foles hit Sproles on a short screen pass. The Birds 5-foot-6 running back sped past Colts defenders and was not tackled until he reached the Colts six-yard line.

On the next play, Foles hit wide receiver Jeremy Maclin for the game-tying score with 3:30 left in the game.

But Sproles wasn’t done just yet.

After forcing Indianapolis to a three and out, the Eagles started from their own 40 and moved down to the Colts 36 on a 24-yard pass from Foles to tight end Zach Ertz.

Another swing pass from Foles to Sproles for 17 yards put the Eagles in closer field goal range for Parkey’s game-winning 36-yard field goal.

When the Eagles have both Sproles and LeSean McCoy on the field at the same time, gives opposing defenses a lot to think about. McCoy gained 79 yards on 20 carries and one touchdown in the win over the Colts. He said Sproles has been an important part of the offense.

“Without Sproles, we would be in some trouble, to be honest, we really would. That’s why we’re a team,” McCoy said. “When guys are struggling, he’s picking everybody up.”

It looks as if Kelly also has an ultimate weapon.

And his name is Darren Sproles.

The Power of Three