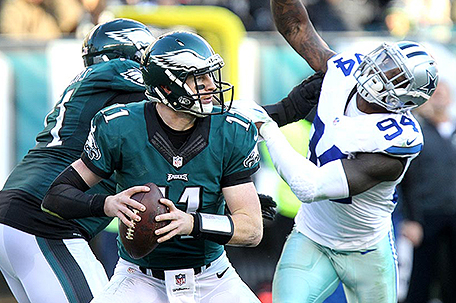 This weekend, the Dallas Cowboys and Philadelphia Eagles play for the NFC East title.

For the Philadelphia Sunday  Sun

Despite their losing streaks, bad losses, questionable coaching decisions, devastating injuries, and struggles, the Philadelphia Eagles (7-7)  or the Dallas Cowboys (7-7) will emerge as the champions of a very weak NFC East and will open the playoffs at home against a road team with a better record.

Considering neither team has taken meaningful control of this division, something’s gotta to give this Sunday at Lincoln Financial Field. If the Eagles defeat the Cowboys on Sunday and the New York Giants in the season finale, they will win the NFC East.  If Dallas wins, they will clinch the division.

As this season has transpired, both of these teams have had their share of bad losses.

For the Eagles, you can point losses to sub-500 teams like the Miami Dolphins and the Detroit Lions. The Cowboys, meanwhile, have lost to the New York Jets and hadn’t beat a team with a winning record until they defeated the Los Angeles Rams 44-21.

Technically, the Eagles will come into Sunday’s game with the “momentum” of a two-game winning streak over the Washington Redskins (3-10) and New York Giants (3-10). In both of those games, the Birds had to come back from a halftime deficit.

On defense, the Eagles have to figure out a way stop Cowboys running back Ezekiel Elliott, who’s coming off a huge performance against the Rams. In the Cowboys 37-10 win over the Birds back in October, Elliott, running behind the Cowboys massive offensive line, gained 111 yards on 22 carries with one touchdown. He averaged five-yards per carry in that game. The Eagles are considered among the best in the NFL at stopping the run, allowing just 90.4 yards on the ground per game.

“We just need to tackle, that’s all we got to do and get (Elliott) on the ground,” defensive tackle Fletcher Cox, said. “Just play team defense and when it comes to the run, this defense has done a good job of stopping the run.”

Whether or not the Eagles win the game will come down to how quarterback Carson Wentz utilizes the extremely limited weaponry he has at his disposal. Wide receivers Alshon Jeffery and Nelson Agholor are out, along with right tackle Lane Johnson and running back Jordan Howard.

While Wentz will no doubt rely on tight ends Zach Ertz and  Dallas Goedert, the key to the Eagles offensive attack will be how they utilize running back Miles Saunders who has shown that he can not only run the football, but can catch it coming out of the backfield.

In the win over Washington, Saunders gained 122 yards rushing with one touchdown while catching  six passes for 50 yards and a touchdown. So far this season, Saunders has gained 687 yards running the football and has caught 42 passes for 433 yards.  The former Penn State star has  1,120 yards rushing and pass receiving for the season.

The Birds are going to need Saunders’s ability to make explosive plays against a Dallas defense that has shown a penchant for getting pushed around and giving up the big play. Head coach Doug Pederson said the key will be to move Saunders around the backfield. He could line up as a slot receiver or in the backfield.

One thing that bodes in the Birds favor are the Cowboys themselves. If they’re playing the Dallas that looked horrible during a three-game losing in which they look like they quit, then the Birds can win it. But if they’re  facing the Cowboys team that ran them out of  AT&T Stadium, it’s going to be a long game and the team will be cleaning its locker room  at the team’s practice facility the Monday after the regular season ends.

In any case, you can check out this version of Bad Football Theater on Sunday at 1 on Fox-29.