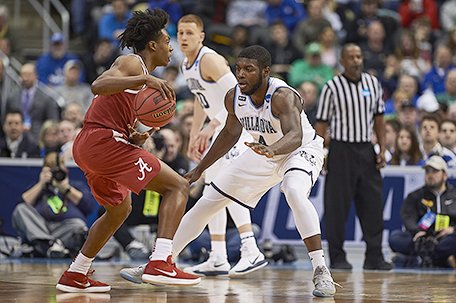 After a weekend that saw the overall Number One seed in the NCAA Men’s Basketball Tournament sent home in embarrassing fashion, the Villanova Wildcats are taking no chances.

Now that half of the number one seeds in the NCAA Men’s Basketball Tournament are watching the games from home —  we see you, University of Virginia and Xavier —  you could argue that the Villanova Wildcats are the  most dominant top seed left.

While the folks in Lawrence, Kansas might disagree with you on that, the only thing that kept the University of Pennsylvania from talking down the Kansas Jayhawks was a combination of bad free throw shooting and overreliance on the three-point shot.

Meanwhile, the Wildcats have dominated their opponents in their first two rounds and no one’s come close to upsetting them.

“We know how difficult it is every game we play. Every team that is in the tournament is in there for a reason,” said Villanova guard/forward Mikal Bridges. “They’re all really good teams; they’ve won tournaments, they’ve won 20-something games throughout the year and they’re coming in hot. You know you can get beat any given day and that’s why we don’t treat any team any different.”

Villanova beat it’s first two opponents — Radford and Alabama — by at least 23 points, but in spite of this, they know that their next opponent, the University of West Virginia Mountaineers, is going to be a tough one. The Wildcats and Mountaineers play on Friday night at Boston’s TD Bank Arena.

West Virginia’s full-court pressure game —  a game that has some referring to Bob Huggins squad as-“Press Virginia”—  will be on full display.

“We always get the teams that are better than their seeding,” Wright said during a gathering with reporters earlier this week.  “I think they are capable of being a Final-Four team, but once you get this far in the tournament you aren’t going to get anyone that doesn’t deserve to be there.

“I think they are similar to us in the fact that they are playing their best basketball right now. They have themselves clicking with each other just like we are, so I think you are going to see a physical and tough game.”

The Mountaineers are coming off a 94-71 win over in-state rival Marshall last Sunday. In that game, West Virginia forced the Thundering Herd into 18 turnovers — including nine steals.  The Mountaineers led the Big 12 in steals with 8.1 per game and was ranked third nationally in blocked shots.

“They score at a high rate and that’s what gets them into their press, so your half-court defense has to be good because if they’re scoring on you they’re in their press,” Wright said.  “I think we are going to have to get in there and take a hit every now and then and hope it doesn’t affect us too much and that we can grind through it.”

The Wildcats have their hands full with 6-foot-2 senior point guard Jevon Carter, who averages 17 points and 6.6 assists, and 4.8 rebounds per game.  He scored 28 points in last Sunday in the win over Marshall.

What Villanova hoped to do against West Virginia is duplicate their second half against Alabama in which they ran the Crimson Tide out of the gym.   The Wildcats scored 49 points in the second half.  They were led by the scoring of Bridges, who finished the game with 23 points.  The 6-7 junior struggled in the first half, scoring just one point.

But in the second half, Bridges came on like gangbusters scoring 22 points and hitting five three-pointers to ignite the Wildcats.

“He continues to grow in every way, skill wise and physically as well, but I thought that showed another part of his mental toughness,” Wright said of Bridges play in the tournament. “There are a lot of things he has done to improve his mental toughness but when you have a tough first half like he did and are able to come out in the second half and pick yourself up and carry your team it’s pretty impressive. I was proud of him and impressed.”