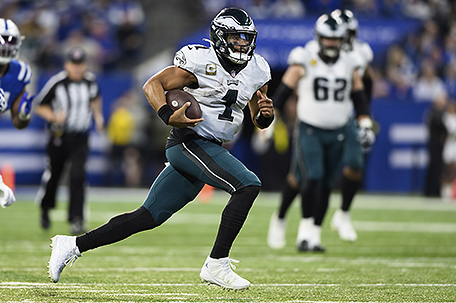 Although they wound up taking home a 17-16 victory, the Philadelphia Eagles had problems with the Indianapolis Colts, some of which were self-inflicted.

Throughout last Sunday’s road game against the Indianapolis Colts, the Philadelphia Eagles did not look like the team on track to be the No. 1 seed in the NFC come playoff time.

Like their Monday night loss to the Washington Commanders, the Eagles struggled to get out of their own way for most of the game. Coming into the fourth quarter, the Birds trailed by 10 and appeared to be on the way to another stunning upset.

But thanks to a clutch fourth-quarter performance by quarterback Jalen Hurts and an equally determined Eagles defense, the team came away with a 17-16 win to improve an NFL-best 9-1 record.

With his seemingly going nowhere fast for the three quarters, Hurts did what great quarterbacks do when things are looking bad late in the game. He put the Birds on his back and willed them to victory by accounting for two fourth-quarter touchdowns, including a game-winning eight-yard score with 1:20 left.

For the game, Hurts accounted for the bulk of the Eagles’ offense. He ran for a team-high 86 yards on 16 carries and completed 18-of-25 passes for 190 yards. One of those passes was a 22-yard touchdown pass to wide receiver Quez Watkins that cut the Colts’ lead to 13-10 with 13:31 left.

“You put the ball in your players’ hand that you trust that can make the plays at that time,” said Eagles head Nick Sirianni. “Jalen is special with the ball in [his] hands. … He executed and he scored. It was pretty sweet.”

But Hurts wasn’t the only reason the Eagles came away with the win last Sunday. The defense, after giving up the game’s first touchdown to Indianapolis Colts running back Jonathan Taylor, did not allow the Colts to cross the end zone for the rest of the game. Indianapolis relied on three field goals for the lead they had going into the fourth quarter.

The Eagles’ defense had two big stops late in the fourth quarter that both kept them in the game and eventually helped them win it.

After Birds wide receiver A.J. Brown fumbled the ball at the Colts’ 34, Indianapolis drove the ball to the Eagles’ 5-yard line. But the Colts would move no further thanks to a huge sack of Indianapolis quarterback Matt Ryan by Eagles linebacker Hassan Reddick for a 14-yard loss.

“That drive that got on the goal line, if they score, that was big by Hassan to get that sack at the end to kill that drive,” Eagles defensive end Brandon Graham said.

The Colts had to settle for a field goal to take a 16-10 lead. That play opened the way for Hurts and the offense drive for what turned out to be the game-winning drive.

After Hurts’s touchdown, the Eagles’ defense kept Ryan and the Colts’ offense from getting into field goal range with a clutch third-down sack by Graham.

“We just persevered through this one,” Graham said. “That’s all we kept talking about somebody’s gotta make a play and it was just us up front. I’m just happy we came up with the ‘W’.”

The Eagles will attempt to move their record to 10-1 when they take on Aaron Rogers and the Green Bay Packers at Lincoln Financial Field on Sunday night. Kickoff is at 8:30 and you can catch the game on NBC-10.