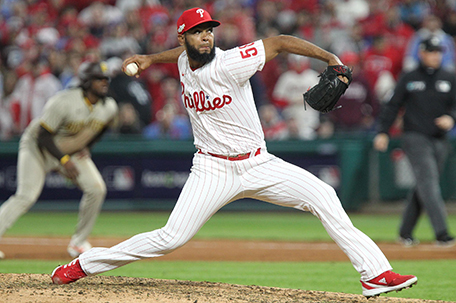 To win Game 3 of the National League Championship Series and continue a playoff winning streak that goes all the way back to Oct. 21, 1980, the Philadelphia Phillies came up with some clutch hits to offset the reappearance of the team’s defensive woes.

ABOVE PHOTO: Seranthony Dominguez made history on Friday night, becoming the first pitcher since Tug McGraw in 1980 to record a six-out save in the playoffs as the Phillies defeated the San Diego Padres in Game 3 of the National League Championship Series. The Phillies now have a 2-1 lead in the best-of-seven series. The winner will go to the 2022 World Series. (Photos: Webster Riddick)

Throughout the 2022 regular season, the Philadelphia Phillies have had a knack for grinding out wins after they made more than their fair share of fielding errors.

That was the case in the Phillies’ 4-2 win over the San Diego Padres in Game 3 of the National League Championship Series. The Phillies, despite two committing two errors, were able to take a 2-1 lead in the best-of-seven series because of their ability to come up with a pair of clutch two-out hits.

“That’s how you’re going to win these games,” said Phillies left fielder Kyle Schwarber, who led off the game in the first inning with a lead-off home run. “It’s not going to be always easy out there. This is some really good pitching that you’re going to see in the postseason. When you get baserunners that’s great, but when you have runners in scoring position you want to cash those guys in.”

With the Phillies leading 1-0 in the fourth inning, the Padres tied the game on a ground ball hit to shortstop Bryson Stott. Normally, this ball would have led to an inning-ending double play, but when second baseman Jean Segura dropped the ball while trying to start that double-play, it enabled Padres right-fielder Juan Soto to score.

But Segura, who had a night filled with ups and downs on Friday, didn’t let his fielding mistake bother him. In fact, he went from goat to hero in a flash with a clutch two-run single in the bottom of the fourth that plated Bryson Stott and Alec Bohm and put the Phillies ahead for good.

“That’s playoff baseball,” Segura said following the game. “When you have two outs, for me it’s huge. It’s very important when you’ve got players that can handle the pressure with two outs with the game on the line and be able to come through. …  I wasn’t trying to do too much. I was trying to put the ball in play. Thank God, it went through.”

The Phillies added an insurance run in the bottom of the sixth inning with another clutch two- out hit when Alec Bohm doubled to score right fielder Nick Castellanos and give the Phillies a two-run lead.

When it comes to defense, the Phillies can be kind of head scratching. Using Segura as our guide, he made a diving stop on a play at second base in the third inning to rob Padres centerfielder Trent Grisham of a hit and ended the third inning as part of a 4-6-3 double play before his error in the fourth.

And it might be time to get first baseman Rhys Hoskins a new glove. In addition to Segura’s error that led to a Padres run, the second fielding error that helped them score came when a ball hit by Grisham bounced off Hoskins’s glove and into foul territory. Grisham end up at second and eventually scored from third on an RBI ground by San Diego shortstop Ha-Seong Kim.

Schwarber said his team is not the type of group that beats up on themselves when things aren’t going well. Baseball is a nine-inning game, and as Segura showed Friday night, you can clean up any error with a good offense.

“Whenever something doesn’t go our way, we can get frustrated about it, but it ends right there,” Schwarber said.  “When you can end it right there focusing on the next pitch. The next play. I feel like we’re doing a real good job through the post season.

Phillies starting pitcher Ranger Suarez, had a solid outing on the mound. He allowed just two hits with three strikeouts and no walks. Only one of the runs he gave up was earned.

“I was very locked in and focused on my job on the mound,” said Suarez speaking through Phillies interpreter Diego Ettedgui.  “I felt real good. I thought I did a good job.”

Phillies relief pitcher Seranthony Dominguez finished off the Padres with a six-out save. The last time a Phillies reliever did that was Tug McGraw during the 1980 World Series. In fact, the Phillies have never lost a postseason game on Oct. 21, the anniversary of the team’s first World Series victory.

“Incredible. Ever since we started the playoffs, he’s been locked in,” said Phillies manager Rob Thomson.  “He’s pitched in the biggest parts of the game and done a great job. The moment doesn’t get to him.”

The moment continues on Saturday night when the Phillies and Padres take the field for Game 4 of the National League Championship Series. First pitch is at 7:45 p.m. You can catch the game on Fox-29, beginning with the pregame show at 6 p.m.

Thud! Phillies win streak comes to an end in loss to Dodgers