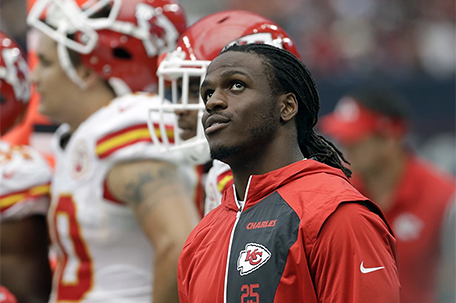 Let’s face it; the Philadelphia Eagles need just about everything.

With the 2017 NFL Draft taking over the Ben Franklin Parkway next Thursday, you don’t need to be ESPN’s draft guru Mel Kiper, Jr. to know that the Philadelphia Eagles should be looking for a little bit of everything.

That’s because the Birds need just about everything. We’ve talked about the needs at wide receiver, but the team also needs a running back, a cornerback, a linebacker, a defensive end – you name it, they need it.

Admittedly, most of my focus here in the SUN has been on the need for the Eagles to get a top-notch wide receiver for franchise quarterback Carson Wentz. For the team’s young quarterback to excel, he must be given the best weapons possible.

But while wide receiver is the most glaring need on offense, I have to wonder if Eagles fans are really happy with what they have at the running back.

Last season, Wendell Smallwood showed flashes of brilliance. But due to the injuries that kept him off the field, Smallwood wasn’t able to convince anyone that he could be the man to tote the rock and catch the ball out of the backfield.

In addition to injury, which he’s been battling his entire tenure on the Eagles, Ryan Mathews is now also battling age, as is Darren Sproles, who has reached the point in his career when he should only be used as a third-down back and punt returner. That’s his niche.

The ideal running back for Head Coach Doug Pederson’s offense is a punishing runner who can catch the ball out of the backfield and block on third down.

If that sounds familiar to you, it’s because I’ve just described Jamaal Charles, the running back Pederson had at his disposal when he was the offensive coordinator for the Kansas City Chiefs.

Maybe that’s why some draftniks are high on Alvin Kamara of the University of Tennessee. The 5-10, 214 lb. back is being compared to Charles in terms of his speed and slashing running style. As a backup at Tennessee, Kamara still managed to gain 596 yards rushing while averaging 5.8 yards per game.  He also had nine rushing touchdowns. He also caught 40 passes for 392 yards and four touchdowns.

What the Eagles coaching staff will really like about Kamara is his willing to block on third down in passing situations, something running backs don’t necessarily like to do in college. 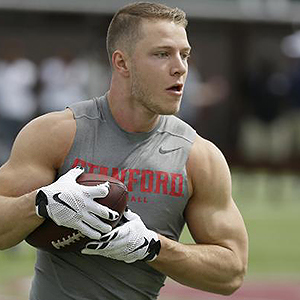 Stanford running back Christian McCaffrey is arguably the most versatile running back in the draft and another guy who fits today’s prototype of an NFL running back. He’s good running with the football, averaging 6.3 yards per carry and gaining 1,603 rushing with 13 touchdowns.

The thing that has folks at the NFL Combine buzzing over McCaffrey is his ability to catch the football and run routes. According to more than a few scouts at the combine, McCaffrey was the best route runner not just among running backs but also wide receivers.

During his final year at Stanford, McCaffrey caught 37 for 310 yards and three touchdowns. In 2015, he caught 45 passes for 645 yards and five touchdowns.

At 5-11, 202 pounds and 4.4 40-yard dash speed, McCaffrey’s size and speed suggests that he might be the guy that replaces Sproles because he doesn’t have the ability to run over people. McCaffrey’s speed and explosiveness make him a compelling choice.  Some scouts have compared him to Reggie Bush.

When it comes to McCaffrey, however, the question becomes can he be a three-down back and the effective pass blocker Pederson needs in the passing game.

Florida State’s Dalvin Cook is another running back that could be a good fit for the Eagles. Cook averaged seven yards per carry last season and had a monster performance in the Seminoles Orange Bowl win over Michigan with 207 yards of total offense (145 rushing and 62 receiving).

Considering he has played with guys like Jameis Winston, Cook has had to do his share of passing blocking and receiving. If they draft him, Cook would fit in just fine with the Birds offense.

And then there’s the University of Oklahoma’s Joe Mixon.

During his final season at Oklahoma, Mixon gained 1,183 yards rushing and eight touchdowns while sharing the load with teammate Semaje Perrine.

Mixon, who also caught 32 passes for 449 yards and five touchdowns, would normally be a guaranteed first or second round.

But the 2014 videotape that showed him punching his girlfriend has caused many teams to avoid him like the plague. That’s not a surprise really. In a league as image conscious as the NFL, even the whiff of a character problem is going to be a deal breaker.

But if the Eagles are willing to give Mixon a second chance, they will be getting another guy who has the ability to be a three-down running back.

We’ll find out if they’re willing to do that next weekend.