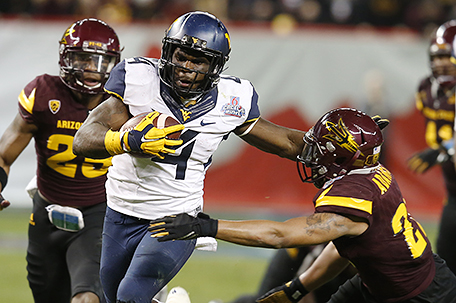 At this time last year, Philadelphia Eagles fans were salivating at the prospect of former Dallas Cowboys running back DeMarco Murray, the league’s leading rusher at the time, leading the team to the Super Bowl Promised Land.

Unfortunately, things didn’t work out that way.  Between a patchwork offensive line and an offensive scheme that didn’t play to his strengths,  Murray couldn’t duplicate what he did in Dallas. Throw in the fact that he really wasn’t happy with the Eagles and had no problem letting anyone, including team management, know it, he was ultimately traded.

While Murray’s departure leaves a pretty sizable hole for the Birds, it also gives a rare opportunity to the team’s fifth-round draft pick, former West Virginia star Wendell Smallwood to make some real noise, starting with this week’s Rookie Mini-Camp. If he plays his cards right, he could be the starting running back for the team.

Of course, running backs Ryan Mathews and Darren Sproles might have something to say about that, but what bodes well for Smallwood is that he appears to be a good fit for head coach Doug Pederson’s West Coast offense.

Playing for a usually pass-happy West Virginia squad, Smallwood led the Big 12 in rushing, gaining 1,512 yards and scoring nine touchdowns. He averaged 6.4 yards per carry and ran a 4.4 40-yard dash at the NFL Combine. Smallwood also caught 26 passes for 160 yards and has experience as a pass blocker.

“When you look at his numbers this year (2015) and you watch the tape, it’s like doubles all the time,” said Howie Roseman, Eagles vice-president of football operations. “Fifty-eight 10-plus yard runs and it’s play after play. He runs with a determination. You see the speed on tape and you see the speed in testing.”

Smallwood fits into Pederson’s offense the way Kansas City’s Jamaal Charles or former Eagles running back Brian Westbrook fit into Andy Reid’s version of the West Coast offense because of his ability to catch the ball out of the backfield.

But Smallwood comes into his first rookie camp with some minor baggage. In July 2014, he was arrested for allegedly trying to get a witness to change a story that implicated his friend in a robbery attempt.  No criminal charges were filed.

Smallwood also got noticed here in Philadelphia for some offensive statements he made about the city in 2011 on, you guessed it, Twitter. He has since apologized and deactivated his Twitter account.

Most of Smallwood’s first press conference with the Philly media was spent fielding questions about his past social media activities and his arrest. To his credit, he handled the onslaught well and said he was happy that Eagles picked him.

“This organization trusted and believed in me and had confidence in me to know that’s not the person I am,” Smallwood said. “I think the impression that I left with the Eagles was good enough to get me drafted.”

While the scrutiny is understandable on one level, they amount to youthful indiscretion and bad judgment. If folks got judged on the stupid things that they did and said they were 18 or 19 years old,  a lot of people wouldn’t have jobs.

Did it have anything to do with why he was a fifth round pick? Not really. Had Smallwood stayed for his senior year at West Virginia, he might have been a Heisman Trophy candidate or Doak Walker Award candidate as the nation’s best running back.

Smallwood said he’s going to come into the Eagles camp with something to prove in the way he did in his final year at West Virginia.

“I’ve always played with a chip on my shoulder since I started playing the game,” Smallwood said. “That’s because I wasn’t getting the respect that I deserved. Just wanting to work for everything and wanting to prove to people that I’m better than whoever put me against. I’m a competitor and I love to compete.  I approach the game that way and its paid off that way in getting me here.”