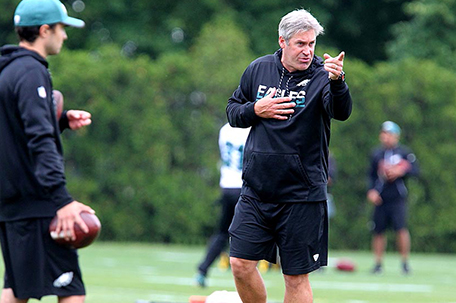 Among the biggest question marks for the Philadelphia Eagles is the running game.

While the Philadelphia Eagles have made some key free agent acquisitions at the wide receiver spot this offseason, the running game for the Birds offense is still a big question mark.

Sure, the NFL has become a league that likes to sling the ball around, but you still have to run the football if you don’t want to draft a new quarterback every year. If for nothing else, a good running game helps you avoid becoming predictable.

How the Eagles sort out their running back situation will be one of the key things to watch throughout organized team activities and training camp. Recently, the team brought in former New England Patriots running back LeGarrette Blount, who gained 1,161 yards in 2016 with 18 touchdowns.  The 30-year-old Blount averaged 3.6 yards per carry last season.

While he is no doubt on the back nine of his career and has a history off the field incidents, Blount brings a veteran presence (and a pair of Super Bowl rings) to a team whose running back corps is young and inexperienced. Until one of the youngsters proves himself worthy of feature back status, Blount fills the void.

Head coach Doug Pederson recognizes that he has some big decisions to make when it comes to finding a feature back.

“I’ve got to figure out where and how LeGarrette fits,” he said. “We know what Darren can do, we know what Wendell (Smallwood) can do. You’ve got Donnell Pumphrey sitting there and we want to see what he can do. We want to utilize those guys because they’re nifty and quick.”

Of the undrafted rookie free agents, the guy that I believe has a solid chance to emerge as a top candidate for that running back spot is former Wisconsin star Corey Clement.  During his time in Madison, Clement was a first-team All Big-10 selection who gained 1,375 yards runs and scored 15 touchdowns.

At 5-11, 221 pounds, Clement is big enough and seemingly has the durability to be that three-down back in the Eagles offensive scheme.  But the knock on him is that he doesn’t catch the football out of the backfield, although he did show the scouts at the Senior Bowl that he has a grasp of the passing game.

He’s also got the pressure of proving that a back from the University of Wisconsin is capable of being a good pro. From 1999 Heisman Trophy winner Ron Dayne, to guys like Michael Bennett and Montee Ball, Wisconsin Badger running backs haven’t had many fans in the NFL.

Then, there’s Pumphrey. The former San Diego State back currently holds the NCAA’s all-time rushing record, but the word is that the fourth-round pick is destined to be the heir apparent to Sproles as the Eagles return-specialist.

That’s mainly because of Pumphrey’s 5-8, 176-pound stature, which doesn’t scream NFL starting running back.  There are scouts and football observers who think his size will keep him from being durable enough to be an every down back.

But his attitude will put him in the conversation, said Joe Douglas, the team’s Director of Player Personnel.

“You’re talking about a guy that broke [NFL Hall of Famer]Marshall Faulk’s record,” Douglas said. “Great hands and great feet. And don’t let the size fool: this guy, he’s a little dog that thinks he’s a big dog, and he plays that way. I love the way he plays and how productive he is.”

The Eagles also have Smallwood and Byron Marshall competing to get on the field.  Smallwood was  slowed down by injuries last season. When on the field, both Smallwood and Marshall showed flashes of brilliance, but not quite enough to warrant more playing time.

But that was last year. Because the running back position for the Eagles is so wide open right now, it’s anyone’s game.