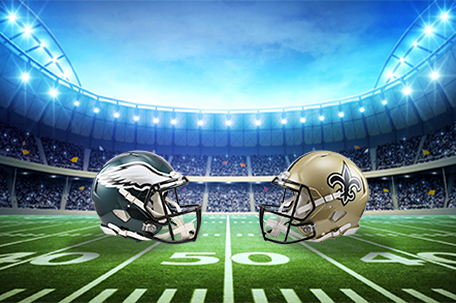 When the Philadelphia Eagles take the field against the New Orleans Saints on Sunday, they hope to send the Saints marching out.

At the end of that game, safety Malcolm Jenkins harshly admonished his team and questioned their will to fight because Drew Brees, Alvin Kamara and the Saints offense bombed the Eagles defense into the stone age by rolling up 546 yards of total offense against a secondary that was ravaged by injuries.

“It was one of those things that I didn’t feel like as a team we had a lot of fight. I’d rather get thrown out of a game then just lay down and take it,” Jenkins told ESPN.com a few days later.   It’s just a rough day overall, but at this point in time we need to figure out some things about ourselves.”

The Birds eventually did figure it out and went on to win six out of their last seven games, including last weekend’s NFC Wildcard game over the Chicago Bears.

And now, in playing the top-seeded Saints in Sunday’s NFC Divisional Playoff matchup, it all seems to have come full circle.

The mission for the Eagles is really quite simple on both sides of the football. On offense, the Birds are going to have to occupy the football and keep Brees and the offense off the field.

Head coach Doug Pederson said the Eagles offense has been better at moving the chains and quarterback Nick Foles has done a good job distributing the football, especially on third down.

“One of the things, we’re better on first and second-down, too, so our third-downs have been not quite as long as they were early in the season,” Pederson said.  “That’s a benefit to the whole operation. So it does make it a touch easier to complete a shorter pass or run the ball in some of those situations, which we’ve been able to do. From Nick’s stand point, it’s just managing that on third down and he’s managing it well.”

On the defensive side of the football, the Birds have to keep Brees from making the big-play and do whatever they can to get that Saints offense off the field. New Orleans was 6-of-11 on third down conversions. The Saints took care of business in the red zone, scoring touchdowns on 4-of-5 trips.  In the game against the Eagles, Brees passed for 363 yards and threw four touchdown passes

The key, of course, for the Birds front seven is to put pressure on Brees.  In 16 games, Brees has been sacked just 17 times.

“He’s seen just about everything known to mankind,” defensive coordinator Jim Schwartz said. “He has good playmakers at all the different position, so there’s picking and choosing times. There are sometimes where you have to play zone and sometimes you have to play man. Bottom line is you have to defend, tackle and you have to keep the mistakes down.”

Defensive end Chris Long said the Birds defense has to figure out a way to stop the Saints on first and second down situations while not giving up the big play.

The real question for the Eagles coming into this divisional playoff matchup with the Saints is whether the Birds inexperienced secondary with players like Avonte Maddox and Cre’Von LeBlanc can hold up against Saints weapons like wide receiver Michael Thomas.

We’ll all find out on Sunday when the Eagles and Saints take the field. Game time is at 4:40 pm and you can see the game on Fox-29.