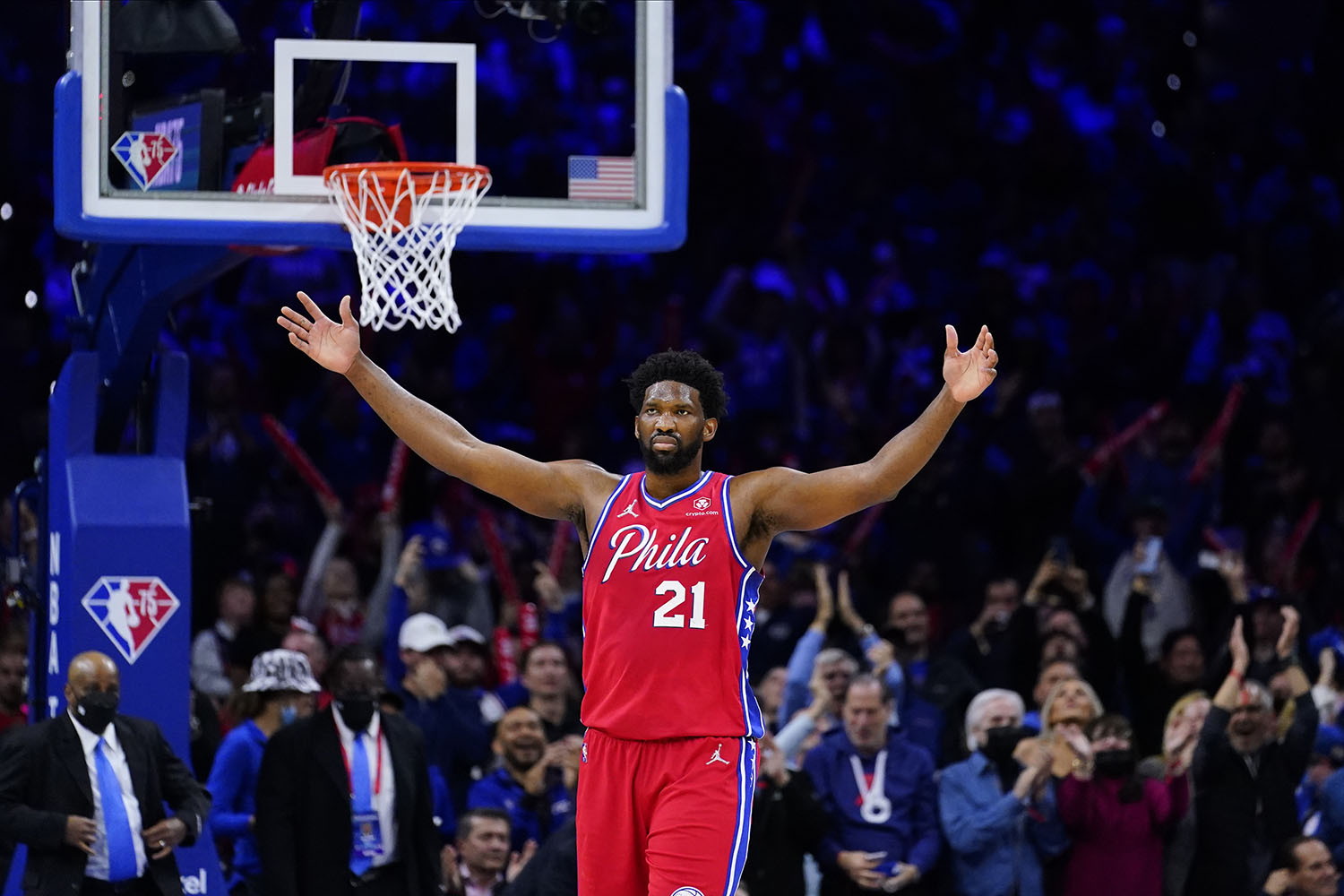 No matter how the final vote turns out, Wednesday’s Game 3 win over the Toronto Raptors shows why Joel Embiid of the Philadelphia 76ers should be the league’s Most Valuable Player.

When the NBA’s beat writers vote for the Most Valuable Player Award, postseason play isn’t taken into consideration, it’s because the award focuses on the grueling 82-game regular season.

That said, Philadelphia 76ers fans are probably saying Joel Embiid’s three-pointer with 0.8 seconds left in Wednesday’s overtime thriller over the Toronto Raptors to give the team a commanding 3-0 lead in their best of seven NBA first-round series is yet another reason why the award needs to be sitting in the trophy case of the former Kansas star.

This performance has been the norm for Embiid throughout the regular season. He led the NBA in scoring, averaging 30.6 points per game. He can beat you on the low post, he can hit the mid-range shot and if he wants to, Embiid can take you beyond the three-point line. By the way, he shot 37 percent from three-point range, which is pretty darn good for a 7-foot tall low-post player.

That said, consideringEmbiid’s greatness this season, there’s only one thing to do with the 2022 MVP Award — just ship it to him. You heard me. I don’t care whether they use Amazon, UPS, FedEx, the U.S. Postal Service or UberEats, Embiid is the 2022 NBA MVP period. To quote well-known college basketball analysis Bill Raftery: “Send it in!”

Of course, the irony of Embiid hitting the game-winning shot Wednesday in Toronto was not lost on him. This was the same place in 2019 where Kawhi Leonard’s buzzer-beating shot eliminated the 76ers in the Eastern Conference semifinals.

To his credit, Embiid treated his game-winning shot not as the end all-be all, because the Sixers still have to close out the series against Toronto in Game 4 and he said he is focused on his goal to get the 76ers beyond the second round and eventually to the NBA Finals.

“It felt great. Obviously, we know about what happened a couple of years ago,” Embiid said. “It felt great but the job is not done. … It’s only the first round. Once I get past the second round, I can start feeling that way. Then you start thinking what comes next after the second round. The (Eastern) Conference Finals and the NBA Finals and winning the whole thing.

“During this whole series, I haven’t thought about coming here and getting my revenge,” he added. “I’m focused on winning the whole thing one game at a time and doing whatever I can to get us there.”

So far in this series, Embiid’s presence has enabled his teammates to find open lanes and open shots to the basket. In Game 1, the Raptors were so concerned about containing Embiid that Tyrese Maxey was able to score 38 points and Tobias Harris was able to score 26 points.

“(Embiid’s) presence created a lot of points,” Rivers said after Game 1. “A lot of those drives (Toronto) made the choice not to help and stay on Joel and that gave us lanes. That’s why he’s so great his presence creates scoring for us.”

Making everyone around you better is yet another reason why Embiid should win the MVP awards and so far this series, he’s already scored 30 points in two games of the three games. This series tells you why he deserves that award.

The Sixers hope to sweep out the Raptors on Saturday by winning Game 4 at Scotiabank Arena in Toronto. Tip-off is at 2 p.m. on NBC Sports Philadelphia and TNT.