The Prodigal Son Returns… To The NBA Championships 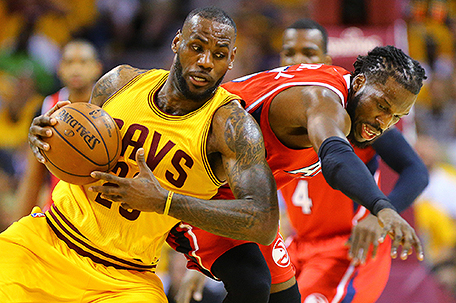 ABOVE PHOTO:  Cleveland Cavaliers LeBron James, left, and Hawks DeMarre Carroll battle for a loose ball during game four of the Eastern Conference Finals on Tuesday, May 26, 2015, in Cleveland. (Curtis Compton/Atlanta Journal-Constitution via AP)

When LeBron James made the decision this summer to return to the Cleveland Cavaliers, residents of this beleaguered city dreamed of an NBA Finals. Will this be the year?

For the first time in a long time, I’m actually looking forward to the NBA Finals.

In fact, I believe that the series has the potential to be an instant classic.

The series between the Cleveland Cavaliers, champions of the Eastern Conference and the Golden State Warriors, Western Conference Champs will feature two Most Valuable Player—Cavaliers superstar LeBron James and Stephan Curry, winner of this year’s MVP award—that have the ability to put their teams on their backs.

But while there will certainly be a lot of overarching storylines emerging from this series, the one that will surely stand out is actually based on something that happened last summer: LeBron James’ return to the Cleveland Cavaliers.

Or put another way, Will the return of the prodigal son lead to Cleveland’s first championship parade in 51 years?

Last summer, with much of the fanfare that went with his departure, James decided to return to his hometown Cavaliers. Because of this, a town that was so angry when he left that they burned his jersey and an owner in Dan Gilbert who is probably still trying to digest the prodigious amounts of crow he had to eat in order to get him back, found themselves having to cheer for James again.

To his credit, James didn’t take the nonsense coming out of his hometown personally upon his return.

“It’s a hardworking city and if you work hard, they work hard for you,” James said. “They give everything back.  … We’re just trying to work hard for the city and they give it all back to us.”

James, who is playing in his fifth straight NBA Finals, has another opportunity to add to an already outstanding legacy.

“For us to be sitting at this point today being able to represent the Eastern Conference in the Finals, this is special. Very special,” James said after the Cavalier series-clinching win over the Atlanta Hawks.

It’s not a position that a lot of us, myself included, expected the Cavaliers to be in. I personally thought it would take a lot longer to go from a 33-win season that kept it out of the playoffs to the top of the mountain. But if it happens, and the Cavaliers win the NBA championship, James, accompanied by all-stars Kyrie Irving and Kevin Love, would have led one of the greatest turnarounds in the history of the league.

The team struggled at various times throughout the season and added a few players along the way to make them better. They started the season 19-20, but finished 33-9 the rest of the way. Cavaliers head coach David Blatt credited James and the team rallying around each other for the turnaround to their season.

“We’ve got a group of players that have a lot of grit and a lot of character,” Blatt said. “And we have a champion (James) who leads them in the right way, a guy who is not only a fabulous basketball player, but he’s an experienced winner who’s about the right things and who leads his guys in a way that empowers them and does not belittle them, in a way that lifts them.”

The key acquisitions the Cavaliers made during the season have come up huge in the playoffs.  Imam Shumpert and J.R. Smith were a couple of players who were not happy playing for a God-awful New York Knicks team. Shumpert scored 16 points in Game 2 of the Eastern Conference Finals and held Atlanta’s Kyle Korver to 4-of-11 shooting.  Smith dropped 28 points in the Cavaliers win in Game 1.

There have also been outstanding performances from journeyman Matthew Dellavedova, who subbed for an injured Irving in the second half of the Cavaliers series-clinching win over the Chicago Bulls. He scored a team-high 19 points.

Forward Tristan Thompson has been all over the boards for the Cavaliers, averaging 9.9 rebounds per game. He has also been a top-notch defender.

But, the one constant, of course, has been James, who is averaging close to a triple double in the playoffs, scoring 27.6 points per game while pulling down 10.4 and 8.3 assists per game. Thompson said James has been a motivating force for the team ever since he decided to come back to Cleveland.

“Once he decided to come back, the first thing I did was call the coach and get in the gym and get ready because I know how serious (James) is about being successful and doing something special here in Cleveland,” Thompson said.  “It just motivated myself, and I think it motivated all the guys on the team to just get better.”

While it isn’t going to be an easy road to the championship, a Cavaliers win could cement James’s legacy within the NBA.

At the very least, it’ll give a city that hasn’t seen a championship in 51 years something to shout about.