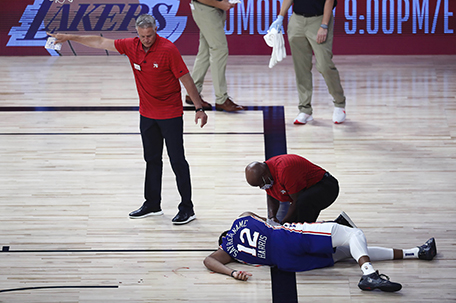 ABOVE PHOTO: Philadelphia 76ers head coach Brett Brown, left, reacts as forward Tobias Harris (12) is attended to after hitting his head against the Boston Celtics during the third quarter of Game 4 of an NBA basketball first-round playoff series, Sunday, Aug. 23, 2020, in Lake Buena Vista, Fla.  (Kim Klement/Pool Photo via AP)

Whether you were listening to my radio show on 900 AM/96.1FM WURD or reading one of my columns here in the SUN, I kept saying that how well the Philadelphia 76ers did in the playoffs would be a referendum on Brett Brown’s tenure with the team.

After a mediocre performance during the seeding phase of the NBA’s games in the Orlando bubble and a four-game sweep at the hands of the Boston Celtics, the Sixers organization decided it was time to part ways with their head coach. Brown was fired on Monday.

To be sure, the Sixers underachieving in the playoffs for the last three years wasn’t entirely Brown’s fault. There’s plenty of blame to go around, including some from the players and the organization itself. I’ll get back to that in a minute.

When it came to hanging onto to fourth-quarter leads or trying to get his young superstars like Joel Embiid and Ben Simmons to expand their games, Brown was an epic fail as a coach. At various times during Brown’s tenure in Philly, the Sixers consistently had trouble hanging on to leads in the fourth quarter.

Throughout their time in the bubble, the Sixers would carry leads in the fourth quarter only to have the other team come back to steal the game or make it closer than it should be.

Whether it was the first game in the bubble against the Pacers when they had a 10-point lead in the fourth quarter or last year’s game 4 of the Eastern Conference semifinals when they had a four-quarter lead against the Toronto Raptors, Brown, who was known as a defensive-minded, did a poor job of managing his team in the final period.

Brown didn’t do a good job of managing the petulance of his superstars Embiid and Simmons.  Throughout his time with the 76ers, Embiid has been injured, grossly out of shape or some combination of the two.

For a 7-foot, 280 pound guy, Embiid seems to content with taking long-range three-point shots instead of dominating the low post as a center.  Brown, unlike his former boss Greg Popovich of the San Antonio, didn’t lay down the law and stress the importance of him establishing a presence in the low post and coming up with moves to get an easy basket.

But there were also times that Embiid has come into games out of shape and would come into the fourth quarters of games winded.  Brown treated Embiid with “kid gloves” and never stressed the importance of staying in shape. Brown never established any accountability for Embiid.

In this year’s playoffs against the Celtics, Embiid started the great game scoring 15 points in the first quarter of Game 2 but didn’t fare so well in the final three quarters, scoring just 14 the rest of the way.

And then there’s Brown’s handling of Simmons, who made a point of defiantly refusing to learn to add a jump shot to his arsenal of weapons. Instead of working to evolve his game, Simmons teased 76ers fans by putting out videos of him shooting three-pointers.

But Simmons rarely took those outside shots of any kind during a game. No one is expecting him to be a long-range three-point bomber, but he should be a least proficient at hitting a mid-range jumper from 18 to 15 field.

That would make Simmons an even more dangerous weapon for the Sixers. Instead, Simmons got irritated with reporters who dared to ask him about it.

Brown did not hold Simmons accountable and the rest of the players in that locker room bore witness to his unwillingness to hold them to a higher standard.

“He’s got to have some accountability. I don’t think there’s much accountability,” said Sixers guard Josh Richardson. “I think that was part of our problem.”

Of course, the one Sixers player during Brown’s tenure that was willing to come hard on a nightly basis was Butler, who didn’t get along with Brown. General manager Elton Brand ultimately moved Butler to Miami for Josh Richardson and then re-signed Tobias Harris $180 million.

The inability of the support pieces like Harris and Richardson to help the Sixers move to the next level consistently also doomed the Sixers to another premature playoff exit. That’s something Brand is going to have to fix for next season.

If he doesn’t, he might have to pack his bags as well.