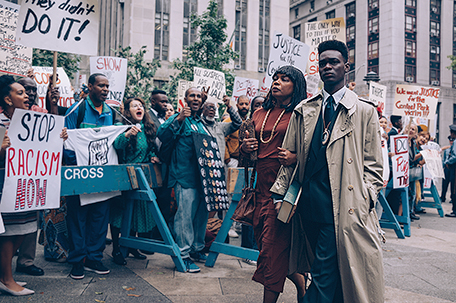 The next time you have friends over to watch the NBA Finals or the Super Bowl, and they tell you that athletes should stick to sports, pop some popcorn and put on “When They See Us.” If they don’t get it after that, you might need to find new friends.

When you see my byline in the SUN most weeks, it’s attached to a story about a sporting event, a game, or some nonsense that your favorite local team has perpetrated on you, its long suffering fan base.

But while that’s my primary interest, it’s not my only one. And while my fiancée will tell you that I can find some way to weave sports into anything I talk about, an even bigger interest of mine is history. To be exact, it’s African American history, and often, the role athletes play in it.

As someone who has been covering police brutality protests in pro sports since their inception, I thought about that as I looked at Ava DuVernay’s Netflix miniseries “When They See Us.”

What happened to the young men who were labeled the Central Park 5 and other victims of a racist criminal justice system is why former San Francisco 49ers quarterback Colin Kaepernick took a knee during the National Anthem. It is why Philadelphia Eagles safety Malcolm Jenkins raised his fist in the air and spoke about criminal justice reform in Congress and state legislatures throughout the country. It is why people took to the streets of Ferguson, Missouri and Baltimore. It is why Tommie Smith and John Carlos raised their fists in the air 51 years ago at the 1968 Olympics.

It’s why no one should stick to sports. Or singing. Or acting. Or just writing, until what happened to Korey Wise, Raymond Santana, Antron McCray, Kevin Richardson, and Yusef Salaam never happens again.

When it comes to movies that dramatize moments in African American history, I often find myself barking at the screen due to a lack of historical accuracy. But when I got the chance to look at “When They See Us,” I found myself in a fit of rage for another reason.

She got it right. And it was haunting.

DuVernay’s retelling of the Central Park 5’s story and how they were unjustly railroaded by the New York City Police and an overzealous, arguably racist prosecutor is enough to evoke feelings of outrage, now that we know all the facts in the case.

In 1989, Wise, Santana, McCray, Richardson, and Salaam were wrongfully convicted of a crime in which the police coerced false confessions out of them, even though the cops knew there was no DNA evidence linking them to the brutal beating and rape of Trisha Meili. After spending up to 12 years in prison, the boys were ultimately exonerated when Matias Reyes, a convicted rapist, came forward to admit that he was the man who committed the crime.

It was the same old song for African Americans and Latinos. In spite of all the evidence that should have exonerated of all five of these young men, it was another case of Black men being presumed guilty before being proved innocent.

Or as I often say, it was another case of African Americans being on double-secret probation.

And that was the source of my anger. DuVernay did a compelling job of graphically capturing how the rush to the judgment on the part of the New York City police, the local media and prosecutor Linda Fairstein stole the innocence of five young men who had no prior criminal records by dehumanizing them.

I guess what got me to unfurling all kinds of expletives as I binged watched all four episodes was that I kept thinking about all the shootings of unarmed Black men in the last five years and all the other micro aggressions that Black people face. When will this BS stop?

Where DuVernay really hits home to her audience in the four episodes is her portrayal of the Central Park 5’s lives after they got out of prison, especially Raymond Santana’s struggles to find a job because of his status as a “convicted felon.”

This depiction is basically a dramatic and more graphic illustration of what Michelle Alexander presented in her groundbreaking book, “The New Jim Crow: Mass Incarceration in the Age of Colorblindness.”

In her book, Alexander’s research shows how many convicted non-violent drug felons have no chance to recycle themselves back into society after they have paid their debt to society. They are not able to vote, get public assistance or financial aid if they want to further their education because they have to put a check mark in that box that says, “Have you ever been convicted of a felony?”

Unable to find work, it’s not surprising that many of those felons wind up back in prison. When you can’t earn a wage at all — much less a living wage — legally, and you need to keep a roof over your head and food on your family’s table, you may find yourself having to do so illegally.

DuVernay does an outstanding job of bringing Santana’s frustrations to the silver screen. Because he could not find any legal means of finding work because of his felony condition, Santana found himself back in prison for selling drugs.

And it found me spewing more expletives.

And don’t me started on how the film depicted the saga of Wise, who spent more than 10 years in some of New York’s worst correctional facilities. DuVernay did a masterful job of bringing out the suffering of Wise and how his youth was stolen from him because a prosecuting attorney was hell-bent on pinning this rape on a group Black kids, despite the fact she had no physical evidence.

The fact that Fairstein doubled-down on her insane belief that the Central Park Five was still guilty despite the confession of Reyes, whose DNA was found all over Meili, is example of how people allow racism to cloud their judgment despite evidence to the contrary.

But in the midst of my anger — my fiancée was counting the number of times I used phrases like “racist mother-f—ckers” during the film and I’m not so sure she got them all — I came to a very sobering conclusion that actually gave me hope that we can win this struggle. Because somehow this has to stop.

And it has to do with what I was talking about at the beginning of this piece.

While there are some out there who because of their devotion to one of the characters in the Central Park Five saga — President Donald Trump — will never see their responsibility to do better in light of what happens in our criminal justice system, they’re being far outweighed by the people who do.

And many of those who accept this responsibility are athletes. And actors. And other people who we expect to entertain us, but have decided to teach us something instead.

But it also shows us one of the guideposts on the road to “Black Lives Matter!”, how far we’ve come, and how much further we still have to go.

MJ, Kurt, Whitney needed to get over themselves, says Santana