The Politics of Appeasement 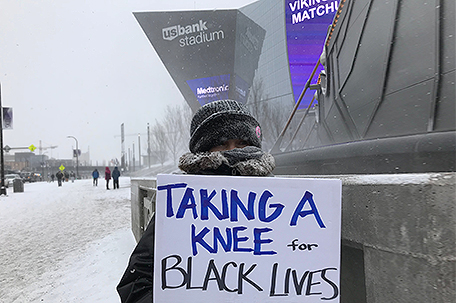 With its recent ban on kneeling during the National Anthem, the National Football League has let its players know who counts and who doesn’t.

Well, if you ever wanted to know who counts to the National Football League, you found out when the league announced its new policy against kneeling during the National Anthem last week.

Corporate sponsors count. White fans whose sensibilities were offended by the players “disrespecting the flag” in the name of fighting racism and police brutality count. President Donald Trump (and his grammatically challenged Twitter account) count.

But the league’s players —70 percent of whom are African-American and are the topics of police brutality and mass incarceration, something many of these players, their families and their friends have been subjected to —- don’t count. Not even a little.

Under this new policy, the unconstitutionality of which I’ll get into in a minute, players wanting to protest during the National Anthem will have two options: take a knee on the field and be fined as much as $1,000 for protesting, or stay in the locker room until the anthem is finished.

Because Commissioner Roger Goodell implemented this new policy without consulting the players, and, as we later found out, many of the owners, he should expect a visit from the NFL Players Association. One owner, New York Jets CEO Christopher Johnson, has promised to pay any fines connected to player protests for his team.

What’s sad about this is that the people taking a knee during the National Anthem were never doing it with the intent to disrespect. The intent, as it has been with protest since the Boston Tea Party,  was to bring attention to pressing issues, which in this case were police brutality and mass incarceration.

But the NFL has decided that that words and feelings of 45 and his minions are more important than the First Amendment rights of its mostly Black workforce, and the issues that this workforce wants to bring to the fore.

It’s really very sad, and will probably end up costing the league the part of its fan base of color that it hasn’t already lost due to the not-so-hidden message through the blackballing of Colin Kaepernick that it’s been sending to players who advocate for social justice.

Kaepernick and his former San Francisco 49ers teammate, safety Eric Reid, will probably never play football again for taking a knee for social justice. For fans of color, fans who don’t feel like they count to the league, the protest ban sends the message that their dollars and viewership aren’t important. So many of them have strengthened their resolve not to watch any of the games this season.

Now, I can think of more effective ways to really stick it to the NFL owners from the fans perspective, but this really isn’t really about what the fans should do, because they’re not the ones really affected by this policy.

The players are. And it’s time that they stopped with mere symbolism and force the owner’s hand.

African-American players, the principal targets of this rule, need to do something collectively to defy it. While the NFLPA did issue a statement saying that it will monitor and challenge any inconsistencies in the policy as it relates to the collective bargaining agreement, it was milquetoast at best and signals the need for the players to take the law into their own hands on this issue.

What would happen if 70 percent of the league decided to take a knee?  Or better yet, what would happen if those players, especially, well, the Super Bowl Champion Philadelphia Eagles, decided to walk off the field and refuse to play until the NFL treats them like human beings and get a true understanding of why players are protesting in the first place?

Or, what if Goodell simply read the text of the 1943 Supreme Court decision in West Virginia Board of Education v Barnette and saw that the policy of forcing patriotism is unconstitutional, and that following the dictates of a president who doesn’t know that makes him look equally stupid?

Throughout the NFL’s protest movement, the message the players who have chosen to protest has been ignored by the very people who need to hear it in favor of the racism and jingoism that seems to crop up whenever there’s a demand for equal treatment under the law or in any other way. Understanding the injustices that African-Americans experience on a regular basis isn’t something that those cheering this new policy appear to be interested in.

But if all of the games were canceled due to lack of players, there would be no choice but for them to listen.

It’s something the players should seriously consider.