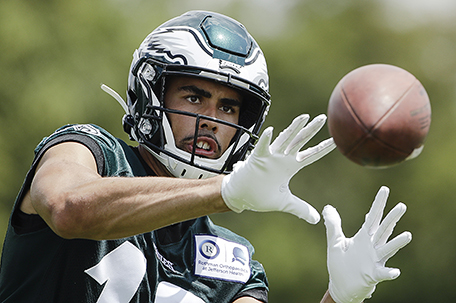 J.J. Arcega-Whiteside is trying to find his way in a Philadelphia Eagles receivers room filled with heavy hitters.

When you’re a rookie in a room full of established veteran players at your position,  it’s easy to feel overwhelmed and intimidated while wondering if you’ll get any playing time at all.

That’s the situation that Philadelphia Eagles rookie wide receiver J.J. Arcega-Whiteside has found himself in throughout the Birds training camp. The second-round draft pick and former Stanford star comes into his first NFL season trying to find a space in a receiving corps that includes superstars like DeSean Jackson, Alshon Jeffrey, Nelson Agholor and Zach Ertz and Darren Sproles and Corey Clement coming out of the backfield.

In a crowded, star-studded receivers’ room, the 6’3”, 225-pound Arcega-Whiteside is starting to make a name for himself.  Throughout the preseason, he has been the team’s leading receiver and has made the most of his opportunities. Coming into Thursday’s preseason game against the New York Jets, Arcega-Whiteside has caught 12 passes for 147 yards and one touchdown.

Eagles head coach Doug Pederson said he has been impressed with the rookie’s growth and development as a wide receiver throughout OTAs and training camp.

“One of the things about J.J. is that he is a hard worker,” Pederson said. “You see it in practice every day. He comes to work every day. He wants to get better. He wants to be taught. … Being able to talk to Josh McCown and Carson Wentz during the week to talk about routes, talk about coverage and I think that really takes it over to the field.”

“I want to come out here and have a big role and help the team to win games,” he said after the Eagles loss to the Baltimore Ravens. “I’m not here just to sit behind somebody all year. At the same time I do realize that these guys are superstars. They’re the best of the best. I’m happy that I can be next to them.  That’s the thing, we don’t like at as who’s one’s, who’s the twos or the threes. We have a group of guys who are going out there and ball. …As long as we’re winning games, that’s all that matters.”

Arcega-Whiteside said one of this biggest mentors has been Jeffery who has been teaching him some nuances of the pro game from the wide receiver’s perspective as well as learning the playbook. He also consults with Jackson and Agholor as well.

“With Alshon I talk to him about being a big receiver, a lot of technique stuff,” Arcega-Whiteside said. “(Agholor) knows the playbook inside and out. D-Jax (Jackson) he’s been helping me a lot after practice. Just being in that room is awesome.”

Where Arcega-Whiteside will probably utilized in the Eagles’ offense is in red-zone situations where he can use height and strength against smaller corners and safeties. During his days at Stanford,Arcega-Whiteside specialized in outfighting opposing defensive backs in space. He won more of those battles than he lost.

During his senior year at Stanford, Arcega-Whiteside caught 63 passes for 1,059 yards and 14 touchdowns. He averaged 16.8 yards per catch and 88-yards per game.  When the Eagles made him. the 57th pick in the draft, some experts said the Eagles got the “steal” of the 2019 draft.

“He’s a gamer,” Ertz said. “He’s someone that competes his butt off in these games. He’s got really good hands. … He’s where he supposed to be when he supposed to be there and the quarterbacks love throwing the ball to him. He’s got a bright future.”