The NBA at 75: From a very modest beginning, to a behemoth 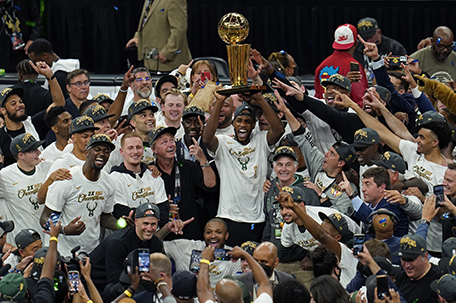 ABOVE PHOTO:  In this July 20, 2021, file photo, the Milwaukee Bucks celebrate with the championship trophy after defeating the Phoenix Suns in Game 6 of basketball’s NBA Finals in Milwaukee. (AP Photo/Paul Sancya, File)

It started in 1946 with 11 teams and 160 players. The shot clock was nearly a decade away, the 3-point line was a couple generations away. Buildings were smaller. So were the players. And it wasn’t even called the National Basketball Association.

The NBA, 75 years ago, was different in almost every imaginable way.

Over the coming months, The Associated Press will look back at what the league was on and off the court, how it became what it is and where it’ll be going over the next 25 years as it moves toward the century mark.

The series will recall those humble beginnings, with Ossie Schectman — who scored the first basket in league history — making $60 a game.

In those earliest of years, teams lost plenty of money. Some of the inaugural franchises only had inaugural seasons, folding after Year 1. There was no robust following and the NBA had little to no impact on societal issues.

And all the players were white.

“None of us who were playing at that time knew what this would be,” Schectman, who played for the original New York Knicks, said in a 2010 interview, three years before his death. “We didn’t know if this was going to work out and become something.”

Schectman scored the first basket in Basketball Association of America history; it wasn’t called the NBA until three years later, but the NBA counts those years as part of its own.

It was an underhand layup for the Knicks in a game at the Toronto Huskies on Nov. 1, 1946, the first two points of 13.7 million in league history and counting.

In time, Schectman got his answer: The NBA, indeed, would become something.

Today, the 30 NBA franchises are worth at least $100 billion combined, possibly much more than that. The league has a fan base that stretches to each corner of the globe and a reputation of being a leader when it comes to social issues.

Richard Lapchick, the son of former New York Knicks coach Joe Lapchick and researcher on social and racial issues within sport, said the league’s platform has always provided an opportunity to be a conduit for change — perhaps never more so than now.

“I genuinely believe that the NBA, with Adam Silver as its current leader, is in this for the right reasons and has the support of the largest integrated labor force in America in terms of percentage of the population,” Lapchick said. “They’re also very wealthy, so they can use their resources — and this is new — to invest in social justice campaigns in their communities.”

There has been a major commitment by players to spark change in recent years, from additional and almost unprecedented levels of support for historically Black colleges and universities, to LeBron James leading a voting rights and registration push that wound up playing a significant role in the 2020 presidential election.

Los Angeles Clippers owner Steve Ballmer believes he knows why basketball tends to make such an impact on society.

“I’ll say something a little silly,” Ballmer said. “How many sports can you really see the players? Football, you’ve got helmets on. Baseball players are quite remote, in center field. Even soccer, hockey, you have guys who are moving super-fast with helmets. People can relate to the players in basketball. You can see them. You can feel them.

“There’s fewer players which means you get more interviews and get to know certain personalities more than you would in just about any other sport,” he added.

“Actually, that’s a significantly important aspect of why basketball becomes much more at the forefront of societal change.”

Like with many things, the early days were the toughest.

The Philadelphia Warriors — now the Golden State Warriors — won the league’s first title in 1947, over the Chicago Stags.

By the time the next season started, four of the 11 original teams had folded; the league added a team from Baltimore and played with eight franchises for the second season.

A 60-game schedule was pared down to 48 to save money on travel. Maurice Podoloff, a hockey executive who was the BAA’s first president and ultimately the first NBA commissioner, was tasked with saving the league and winning a battle with the rival National Basketball League for players and attention.

In May 1948, the battle was won. Four teams left the NBL — Indianapolis, Rochester, Fort Wayne and Minneapolis, who had arguably the biggest name in basketball at the time with George Mikan — for the BAA.

“Maurice Podoloff charted the unknown for the NBA,” the late David Stern, who was the NBA commissioner for 30 years, said when Podoloff died.

“He took an idea and nurtured professional basketball through its formative years.

It is through the efforts of sporting pioneers like Podoloff that the NBA has become an everyday part of the American sporting scene.”

By 1949, the NBA had turned a corner. The league was up to 17 teams, more than doubling what it was. Teams were turning profits. The rebranding to the NBA was complete. And with the evolution in the boardrooms complete, it was time to evolve on the floor as well.

While the race barrier had been broken — Wat Misaka, a Japanese-American player, was drafted and played for the Knicks in 1947 — it was barely noticed, in part because he played only three games.

The first Black players were three years away from joining the league, changing the face of the game for good.

As the country was changing, moving on from World War II and into the civil rights movement, the NBA was in lockstep. Change then led to unrest and division, just as it did in recent years across the U.S. But the NBA pressed on, then and now.

“That’s what this country is all about and should be about,” NBA great and Basketball Hall of Famer Jerry West said. “It’s about fair play. And for years, there hasn’t been a lot of fair play in this country. I think the NBA has been a front-liner in that, and it’s great to see.”

NBA goes ahead with plan to test unvaccinated players often