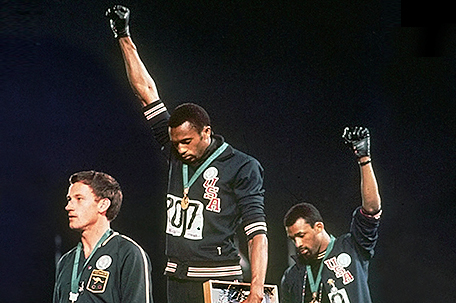 ABOVE PHOTO:  Extending gloved hands skyward in racial protest, U.S. athletes Tommie Smith, center, and John Carlos stare downward during the playing of the national anthem after Smith received the gold and Carlos the bronze for the 200 meter run at the Summer Olympic Games in Mexico City, Oct. 1968. Australian silver medalist Peter Norman is at left.  (AP Photo, File)

The Black athlete has always served as America’s canary in the coal mine.

“Does Bigger Thomas exist in this day and age?”

While much has changed in America, many of the issues that led Thomas — the protagonist in Wright’s novel — down the path of anger that led to his death sentence, issues including poverty, racism and injustice, still exist.

Because of this, the students in my class were nearly unanimous in their belief that there are modern day Bigger Thomases among us.

The anger that causes those feelings sometimes makes people of color in general — and Black people in particular — wonder what has actually changed in this country. Sure, the Civil Rights Act of 1964 was passed, and Barack Obama did two terms as president — but for every step forward, the pushback comes.

I thought about this in light of the observance we’re engaging in right now — the 50th anniversary of a series of events that occurred in 1968.

One of those events was the Olympic Games protest of Tommie Smith and John Carlos. After finishing first and third in the 200-meter dash at the 1968 Summer Olympics in Mexico City, the two men gave the Black Power salute on the medal stand. The silver medalist, Australia’s Peter Norman, joined the protest by wearing a patch from Smith and Carlos’s group, the Olympic Project for Human Rights.

Both Smith and Carlos raised their fists to protest the racism in American society. Because of this, both were dismissed from the team, were vilified in the media, and endured periods of struggle.

The legacy of Smith and Carlos over time has been immortalized in posters, tee shirts, documentaries, books, and a statue commemorating their epic stand.

But perhaps  the most visible symbol of Smith and Carlos’s legacy has been the athletes who have chosen to follow their lead.

From the NFL’s police brutality protests led by Colin Kaepernick, to the demands of players like the Eagles Malcolm Jenkins for laws that address these problems, to the efforts of NBA superstar LeBron James to bring issues to light, Black athletes, like they often have, are serving as the canary in the coal mine for America.

However, the fact that they still have to be in this position 50 years after Smith and Carlos’s protest, is heartbreaking, because it shows just how much further we have to go as a country.

In an interview I did with Carlos back in 2008, he echoed those sentiments.

“When I come home, my eyes are wide open to see that things have not progressed,” Carlos said. “We’re still living the same way, people are still searching for jobs, people still trying to get an education and people are still live their lives with drugs being in the midst of it all.”

Whether you re-read “Native Son,” W.E.B DuBois’ “The Philadelphia Negro,” the Kerner Commission Report, or Michelle Alexander’s “The New Jim Crow,” or are celebrating the anniversary of a historic protest, you will look around you and figure out that not much has changed for Black America in the here and now.