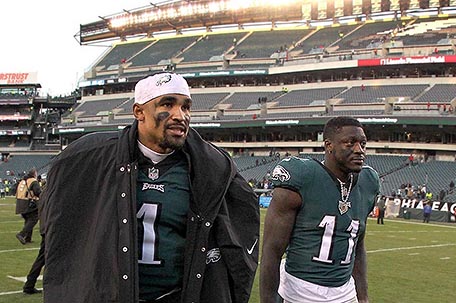 While conventional wisdom says that the Most Valuable Player award is a choice between Kansas City’s Patrick Mahomes  and Buffalo’s Josh Allen, it might be time to add Jalen Hurts of the Philadelphia Eagles into the mix.

I know that we still have five games left until the end of the regular season, but I’m going to put out the campaign buttons and start the “Jalen Hurts for the NFL’s Most Valuable Player” right now.

Now I know that folks will ask me about guys like Kansas City Chiefs quarterback Patrick Mahomes, who leads the NFL in passing, or the Buffalo Bills’ Josh Allen who is also having a great year.

I’ll even let you throw in guys like Cincinnati Bengals quarterback Joe Burrow, who took his team to the Super Bowl last year by beating Mahomes and the Chiefs in a head-to-head matchup, something he also did on Sunday. A good argument could be made for any of those guys.

But for my money, Hurts has been the man for the Birds this season and has silenced his critics from last season about his ability to be a winning quarterback for this team.

The Eagles have the NFL’s best record at 11-1 with five games left and are well on their way to capturing home-field advantage throughout the playoffs. And the reason they’re in this position is because of every aspect of Hurts’s game.

He’s got to get some serious consideration for the MVP based on that.

“I’m a let y’all (the media) call that one, but he’s been our MVP on our team,” Eagles defensive end Brandon Graham said. “We knew going in that Jalen has gotten so much better than what he was last year just in practice from what we were seeing, so I couldn’t wait for everybody to see it now. … (Hurts) is not satisfied. The sky’s the limit for him.”

You can talk about other dual-threat quarterbacks around the NFL like the Baltimore Ravens Lamar Jackson, but Hurts is proving to be quite proficient as both a running quarterback and passing quarterback.  He is no one-trick pony. Hurts has beaten teams with his arms and his legs. If you need proof of that, you can take a look at the numbers in his last two games.

In the Eagles’ 35-10 win over the AFC South-leading Tennessee Titans this past Sunday, Hurts completed 29-of-39 passes (74%) for 380 yards and three touchdowns and a passer rating of 130.3.  He also had a rushing touchdown.  So far this season, Hurts has 29 total touchdowns (20 passing and nine rushing). For the season, he has 3,549 total yards on offense and has completed 68% of his passes.

Among quarterbacks, only Lamar Jackson has more rushing yards than Hurts. But unlike Baltimore’s great signal caller, you can’t devise a scheme for Hurts, so you can make him stay in the pocket because he’ll kick your butt there too.

“He did a nice job from the pocket and was able to make it difficult,” said Titans head coach Mike Vrabel. “So, we stopped the run game and just weren’t able to make them earn in it downfield.”

Having targets like A.J. Brown, who caught eight passes for 119 yards and two touchdowns, and Devonta Smith, who caught five passes for 102 yards and one touchdown in the win over Tennessee, Hurts is truly a dual-threat quarterback who can beat you running or passing.

Last Sunday against the Green Bay Packers, Hurts rushed for 157 yards to lead a rushing attack that compiled 363 yards. He also passed for 153 yards and threw two touchdown passes. Hurts accounted for 310 yards of the Eagles’ 500 yards of total offense.

Of course, Eagles players and coaches were quick to downplay any talk of Hurts being the MVP. But they did acknowledge that Hurts is doing everything possible to put the Birds in the best possible position to win games. You never hear Hurts himself speak about any individual goals.

“I think he’s been playing really good ball,” Brown said. “I’m not going to try and put any pressure on him. He’s been doing an amazing job on the ground and throwing the ball. We’ll leave all the MVP stuff to who votes for all that. But he’s doing a great job leading this team. He’s a great leader. He’s still climbing. He wants the team to be great.”

Personally, I don’t blame Brown for saying that. It’s not his job to make that call.

But, I’m a member of the Pro Football Writers of America and I have a vote.

And right now, I’m leaning toward giving it to Jalen Hurts.

On Sunday, the Eagles take on the New York Giants at Met Life Stadium in East Rutherford, N.J. at 1pm. You can catch that game on Fox-29 beginning with the pre-game show at noon.