The Mother Of All Champions 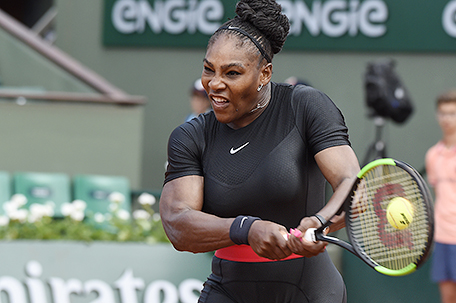 While it took her awhile to get started this tennis season, Serena Williams’s performance at Wimbledon shows that she’s still got the Open Era on lock.

Because there may be more than a few athletes that we can say this about by the time 2018 comes to an end, it might be a tad too early to start talking about those we would crown the sportsperson or athlete of the year.

But if the vote were taken today, mine would go to the current GOAT (Greatest Of All Time) in tennis, Serena Williams.

Notice that I didn’t say “women’s tennis,” I said “tennis.”

While it’s almost a given to many of us that she’s the best women’s tennis player of all time, the fact that she’s currently mowing through her competition at Wimbledon —- dropping only one set the entire competition —- a year after having her daughter Alexis Olympia, allows us to make the argument that she might be the best to ever play the game.

As of press time, Williams has advanced into to the semi-finals at Wimbledon, where she’ll play Julia Goerges. If she wins that match, she’ll be in the finals where she’ll go for her eighth Wimbledon title and  24th Grand-Slam, both of which will tie her all-time with Margaret Court.  She is the all-time leader in the “Open” era.

In fact, Williams is 8-1 in Grand-Slam matches dating back to the 2018 French Open, with the one loss coming through injury.

In the world of tennis, being 36-years-old usually means that you’re old and on your way out of the game. But as this tournament in London has unfolded, Williams has been dusting off her opponents. Coming into the semifinals, Williams has only lost one set, and that came in her quarterfinal win over Camila Giorgi.

Tennis writer and columnist Merlisa Lawrence Corbett told me on my radio show on WURD last week that Williams has the ability to put her opponents away once she has a lead.

“If Serena gets a lead, you just don’t come back on her,” said Corbett who also writes for the London-based Tennis Live. “Serena will put the boot on you.”

In her third-round match against Kristina Mladenovic, Williams was pushed to a second set tiebreaker and then completely dominated her opponent with her serve and won the tiebreaker easily. During the course of that matchup, ESPN tennis analyst and 18-time Grand-Slam winner Chris Evert suggested that Williams was at 80 percent since returning to the court.

Well, if she is just 80 percent and playing well as she is right now, it just may good enough to win it all, especially since all the players ranked in the Top 10 have all been eliminated.

If Williams can somehow close out Wimbledon with her eighth singles title and follow it up with the U.S. Open, she will merit consideration for winning some manifestation of Athlete of the Year.

She already has my vote.