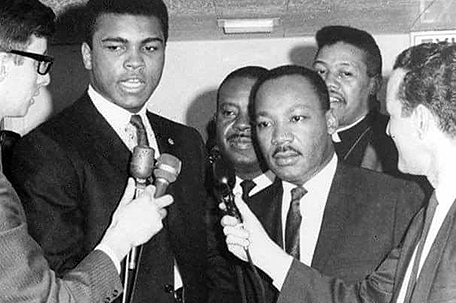 The death of Dr. Martin Luther King, Jr. affected an entire nation. Not only did his death affect millions of Black Americans, but it changed the voice of many Black American athletes. Dr. King’s death had a profound influence on many Black athletes around the nation.

A day after King’s assassination, the Boston Celtics and Philadelphia 76ers were getting ready to take the floor for Game 1 of the 1968 Eastern Division Finals. Due to the assassination, and the respect that they had for Dr. King, basketball greats Bill Russell of the Celtics and Wilt Chamberlain of the met before the game. While they knew they couldn’t have it postponed because the NBA had already decided it would go on, they at least wanted to talk about it with their teammates, which both men eventually did.

A crowd of 14,412 filled the seats at the old Philadelphia Spectrum and the Celtics won the playoff opener  defeating the 76ers 127-118. Wilt Chamberlain scored 33 points in the game for the Sixers, and John Havlicek led the Celtics with 35 points.

Before King’s death, Harry Edwards started an organization called the Olympic Project for Human Rights. Among those who joined him in this venture were sprinters Tommie Smith, Lee Evans, and John Carlos. The group made a series of demands including the restoration of Muhammad Ali’s boxing title (it had been taken away when he refused to go to Vietnam) more hiring of Black coaches, the desegregation of the New York Athletic Club and the end of apartheid in South Africa. If these demands weren’t met, the athletes threatened to boycott the 1968 Olympics in Mexico City.

For refusing to serve in the United States Army, the New York State Athletic Commission and the World Boxing Association stripped Ali of his world heavyweight title, boxing license and his visa. Before they were finished, Ali faced a possible five-year prison term in addition to a $10,000 fine.

After this, Ali spoke to the media and the American people.

“I’m ain’t draft dodging,” he said. “I’m not burning no flag and not running to Canada. I’m staying right here. You want to send me to jail. Fine, you go ahead. I have been there for 400 years. I can be there for four or five more years. But I’m not going 10,000 miles to help murder and kill poor people. If I want to die, I die right here, right now… fighting you. If I want to die, you’re my enemy. I’m not fighting no Chinese, no Vietcong, no Japanese. You’re my opposer when I want justice. You’re my opposer when I want equality. You’re my opposer when I want freedom. You want me to go somewhere to fight for you? You won’t even stand up for me in America. You won’t stand up for my rights and religion belief. You won’t stand up for me right here at home.”

After his appeal, the Supreme Court overturned Ali’s conviction. In 1971, Ali was able to return to boxing and fight defending champion Joe Frazier for the heavyweight world title.

King, who had spoken with Ali often, gave the Olympic Project for Human Rights his full support and met with some of the members. When Carlos stood on the podium accepting his Olympic medal after King’s death, he admitted that the civil rights leader was definitely on his mind as he raised his gloved fist in the air against racial segregation and discrimination. His teammate, Tommie Smith also raised his fist in the air in support.

Both runners were deeply influenced by the Black freedom struggle. Carlos and other members of the Olympic Project wanted to expose how the United States misused Black athletes and left them without any kind of legal rights.

Today, many Black athletes have taken pieces of Dr. King’s legacy and use it to deal with many issues in today’s society.

Probably the most well-known of these stands is that for former NFL quarterback Colin Kaepernick. To protest police brutality, Kaepernick knelt during the playing of the National Anthem before games during his stint with the San Francisco 49ers.

LeBron James, a power forward for the Los Angeles Lakers has used his platforms to speak out against President Donald Trump and some of the things he’s done in the White House.