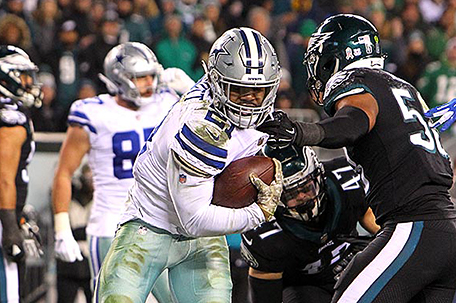 Sunday night’s game against a struggling Dallas Cowboys squad was supposed to be the jump off point for the Philadelphia Eagles’ race to the NFC East crown and the chance to defend their Super Bowl championship.

But by the fourth quarter, the Birds were trailing 27-20 with 3:14. Despite having the ball twice inside that time period, the Eagles (4-5) came up short and now find themselves two games behind the first-place Washington Redskins (6-3) with seven games left, including a tough road game against the high-scoring New Orleans Saints.

“In the month of November, teams to begin to separate themselves,” Eagles head coach Doug Pederson said. “We did take a step back tonight and that’s a disappointing thing. Listen, we’re not going to make excuses for anything. We’re going to come to work and get ready for New Orleans.”

With Drew Brees and the Saints high-powered offense looming over the horizon, Pederson has to be concerned about the inconsistency of his defense.  Dating back to the loss to the Tennessee Titans, the Eagles defense has not played well for all four quarters.  Against the Cowboys Sunday night, the Birds defense gave up 410 yards of total offense to a team that has had trouble scoring all season.

The real problem with the Eagles is that they haven’t been consistent on either side of the football. In Sunday’s game against Dallas, it was the offense that got off to a slow start, scoring just three points in the first half while compiling just 132 yards offense.

“It’s tough,” Eagles middle linebacker Jordan Hicks said. “We were talking about that. If we could put it together, go up and get a lead on teams, it would make it easier. If offense, defense, and special teams could put it all together at one time, it would help a lot. For some reason, it’s just not happening. We have to make it happen. We have to find a way to get it clicking.”

Dallas running back Ezekiel Elliott did the bulk of the work for the Cowboys offense by rushing for 151 yards on 19 carries including the game-winning touchdown with 3:19 left. He also caught seven passes for 36 yards and one touchdown.  Meanwhile, quarterback Dak Prescott completed 26-of-36 passes for 270 yards and one touchdown. He scored the Cowboys first touchdown of the game on a one-yard run late in the first half.

In the first half, the Eagles just couldn’t not get anything going. If there was a sign of bad things to come for the Eagles, it was Carson Wentz’s interception on the Birds second possession that set the tone for what was a bad first half. That interception led to a Dallas field goal.

While the Eagles offense struggled, the Cowboys offense got a huge boost late in the first half when Prescott led Dallas on an eight-play, 75-yard drive that culminated with Prescott’s one-yard run that gave his team a 13-3 lead at the intermission.

The Birds eventually tied the game late in the third quarter on a 15-yard pass from Wentz to tight end Zach Ertz. In the fourth quarter, both teams took turns scoring.

If the Eagles hope to make it to the playoffs, the team has to be more consistent down the stretch, Wentz said.

“We have to get back and look and see what teams are to us early in the game, why are we having these slow starts, and really need to look hard in the mirror because I think tonight, this is what cost us,” Wentz said.