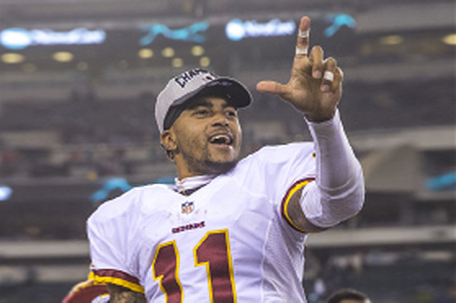 DeSean Jackson’s return to Philadelphia may be as much about starting the next chapter of his career as it is about helping Washington move up in the NFC East.

One of the most intriguing matchups in Sunday’s game between the Philadelphia Eagles and the Washington Redskins will be former Birds wideout DeSean Jackson versus the Eagles secondary.

While the Eagles will have their hands full covering guys like Jamison Crowder and Pierre Garcon and tight end Jordan Reed if he passes the concussion protocol, Jackson is  in the final year of his contract and is no doubt looking to have the kind of season that’s going to garner that could bring him the final long-term deal of his career. Who better to showcase your skills against than the team that unceremoniously dumped you?

So far this season, Jackson has caught 18 passes for 278 yards while averaging 15.4 yards per catch. He has one touchdown. Quarterback Kirk Cousins has targeted him 32 times this season.

If the Redskins don’t offer Jackson a long-term deal, Sunday’s game might also be an audition for the Eagles.

During Wednesday’s conference call with the Philadelphia media, Jackson didn’t come right out and say he’d like to return to the Eagles, but he left the door open.

“You never know how things will turn out, but whatever God’s calling is, I definitely think I’ll be blessed where ever it is,” Jackson said. “Hopefully, it will still be here in Washington. You never know how this industry is going to be, keeping your options, playing it smart, doing what you need to do keep a job in the NFL.”

Jackson was cut in 2014 by former Eagles and now current San Francisco 49ers head coach Chip Kelly, but he harbors no bitterness against the Eagles as an organization or the city of Philadelphia, he said. He also expressed his respect for current Eagles coach Doug Pederson.

“I never really had any hard feelings toward Philadelphia besides being released by who released me, but that’s different. I guess he’s not there no more,” Jackson said. “It’s never been hard feelings toward the team or the organization, but like I say things happen and we move on. I’m blessed to have the opportunity to be playing at a higher level.”

Jackson is still one of the NFL’s best big-play receivers. He remains a deep threat and his ability to burn a defense from long distance keeps defenses from putting an extra safety in the box to stop the running game.

That’s why the possibility of Jackson coming back to the Eagles is such a fascinating proposition. If he were on the current Eagles offense, Jackson would take it  to another level

The only caveat that one might have  with Jackson right now is his age. He just turned 30 and usually that’s an age where athletes are on the back-nine of their careers. Despite the harsh reality that he’s now trying to outrun “Father Time”, Jackson still believes he’s still got another five years left as an elite level receiver..

“I think I’m still playing at a high level, I can still run by guys, I’m still fast and haven’t lost a step,” Jackson said. “I still see myself playing another five, hopefully, another seven years.”

Jackson recently became a father.  He said that having a child has matured him and made him determined to work even harder.

“I love my son, he’s definitely matured me a lot,” Jackson said. It just gives me the extra motivation, determination to go out there and do it for him.”