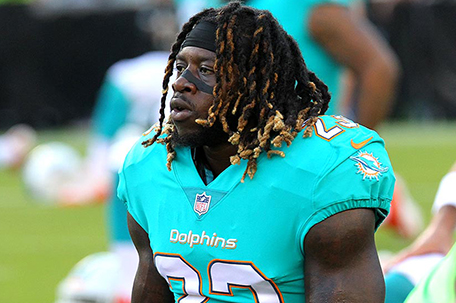 With the acquisition of Miami Dolphins running back Jay Ajayi, the Philadelphia Eagles have pushed all of their Super Bowl chips to the center of the table.

There are a couple of ways you can interpret the Philadelphia Eagles acquisition of former Miami Dolphins running back Jay Ajayi.

One way is that they weren’t necessarily satisfied with running back Wendell Smallwood, who has been inconsistent and has struggled to stay on the field.  After all, Ajayi is a proven three-down back, who gained 1,272 yards rushing, and caught 27 passes for 151 yards in 2016. Should LeGarrette Blount, who has really been impressive this year, decides to move on after this season, Ajayi gives the Birds some options.

But another way of looking at it is that Ajayi will make things easier for Blount, who will probably be used in short yardage situations and to close out games in the fourth  quarter. With a younger Ajayi getting a good chunk of the work, you’ll have a fresher Blount in the fourth quarter.

While all the above issues are logical reasons for the Eagles to make this move, the real reason is that Howie Roseman, the executive vice president of football operations, believes that he has a team capable of making it to the Super Bowl for the first time since 2004.

He’s going all in, in other words.

“We’ve got a long way to go in this season,” Roseman said during his press conference on Tuesday. “We’re just trying to do whatever we can from our perspective to improve the football team … We have a 24-year-old quarterback and we want to be in a position to consistently compete.”

The Eagles making a Super Bowl run this season is not that far-fetched of an idea when you consider that there’s not much separation between the Birds and the rest of the NFC.

The defending NFC champion Atlanta Falcons haven’t been exactly invincible. In fact, they are 4-3 and trail the first-place New Orleans Saints (5-2), who are also not the epitome of a dominant football team. If there was team that the Eagles might worry about, it might be the Seattle Seahawks –who have a vast array of talent on the both sides of the football between quarterback Russell Wilson and a stingy defense that features Michael Bennett and Richard Sherman.

But as good as Seattle has been this season, they’re not the team that blitzed  it’s way to a win in Super Bowl 48.

Just about every team is on the same level and there is not one team that you can point to that’s an odds-on favorite to be the NFC’s representative to the Super Bowl. In short, the Birds chances to make it to the Super Bowl this season is just as good as any other contender or first-place team.

Eagles fans are hoping that Ajayi is the final piece of the team’s Super Bowl puzzle.

But Ajayi does bring some baggage with him from his days in Miami.  For one thing, he has had issues with his right knee.  In fact, when Ajayi was coming out of college in 2015, the former Boise State star didn’t get picked until fifth-round.

There are also reports that Ajayi had issues with his Dolphins teammates and the team’s head coach, Adam Gase.  According to the Miami Herald, Ajayi had a tendency to cause tension and complain about his lack of touches in the Dolphins locker room even after his team won games.

Roseman and the Birds brass believe that Ajayi is that guy to help the Eagles over the top as a Super Bowl contender.  If Ajayi is not who everyone says he is, then Roseman will certainly have a lot of explaining to do.

Eagles shore up defense with Ryans