The First Line Of Defense 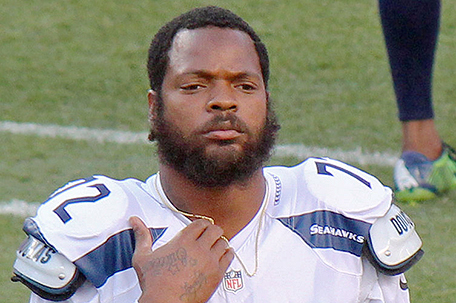 The Philadelphia Eagles believe that this year’s defensive line is going to rock the house.

For the first 57-minutes and 49 seconds of Super Bowl LII, that time-honored football cliché that says defense wins championships was taking a serious beating.

New England Patriots quarterback Tom Brady had picked apart the Philadelphia Eagles defense to the tune of a Super Bowl-record 505 yards passing and three touchdowns.  The Patriots offense amassed 613 yards for the game.

But late in the fourth quarter, Eagles defensive end Brandon Graham proved that aforementioned football adage to be true when he stripped Brady of the football and enabled the team to bring home itsfirst NFL championship since 1960 and their first Vince Lombardi Trophy in franchise history.

With training camp in full swing, the Eagles believe they are better on defense than they were last season, especially along the defensive line. While the team was the NFL’s fourth ranked defense overall last year, and was first against the run, they believe that thanks to a combination of returning players and some new additions to the line, they’re going to be even better.

Departing linemen Vinny Curry and Beau Allen have been replaced by former Seattle Seahawks defensive end Michael Bennett and former Baltimore Ravens defensive tackle Haloti Ngata, both of whom will make it hard for Eagles opponents to move the ball.

Bennett, who was on both Seattle’s Super Bowl teams, had eight and a half sacks last season as a part of what was the “Legion of Boom.”  Even though he will turn 33 in November, Bennett has been impressive in training camp so far, said Eagles defensive coordinator Jim Schwartz.

“He’s done it for a long time. He’s got a great combination of physical skills and experience. He’s a big man. He can play on the edge,” Schwartz said on Tuesday. “He can play inside. He’s got great use of hands. He’s developed a lot of technique. He’s been a consistent rusher over the course of his career. You see all that stuff from him from here.”

Of course, Graham, who is currently on the Physically Unable to Perform list, and Fletcher Cox will also be returning to that defensive line.

Graham led the team in sacks last season with a nine and a half and had 15 tackles for a loss. He probably should have gone to the Pro Bowl last with his teammate Cox, who while not having a lot of sacks has a way disrupting offenses.  Veteran tackle Tim Jernigan will also be back this season as well giving the Birds a tremendous amount of depth along the defensive line.

The Eagles will have no shortage of edge rushers with players Chris Long, who had five sacks and four forced fumbles.  The Birds are also expecting big things of second-year defensive end Derek Barnett, who didn’t have a bad rookie season.  After a slow start, Barnett wound up six sacks and two forced fumbles.  In the NFC Championship game against the Minnesota Vikings, Barnett had one sack and a forced fumble.

Despite having surgery during the offseason for a sports hernia, the former Tennessee Volunteer said he’s ready to take his game to the next level.

“I’m focusing on technique and making sure I’m consistent with my get off (the snap) and not being late off the (ball), my vision has to better, ID-ing the play and seeing things so I can pick up things even faster. Because in this league a step difference can really be a big difference,” he said.

Meanwhile, Schwartz has to be excited about the depth that he has at the defensive line position and he has a number of combinations that he can utilize throughout games this season.

We really don’t operate with depth charts. We try to rotate guys through as much as we can. So you’ll see different combinations,” Schwartz said.

Meanwhile, the opposition will be seeing stars.

Eagles shore up defense with Ryans