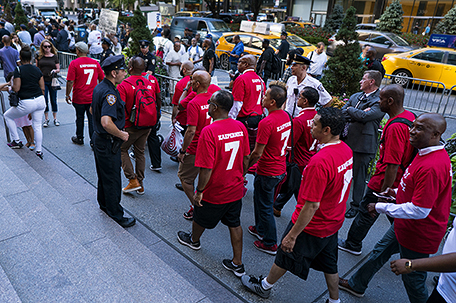 If the whole idea behind not signing Colin Kaepernick to an NFL contract was to end the movement he started, it’s not working.

With kickoff for the regular season of the National Football League a week away, free agent quarterback Colin Kaepernick still doesn’t have a job and the way things are looking right now, he probably won’t get one.

But if the 29-year-old Kaepernick never plays another down in his NFL career, what he started will be way bigger than any touchdown pass he threw or any of his long runs from scrimmage.

A year after Kaepernick began his protest, his symbolic gesture of protesting police violence and mass incarceration against African-Americans by not standing for the National Anthem is still resonating among his NFL comrades as well as fans.

Last week, about 1,500 to 2,000 protesters, led by the Kaepernick’s fraternity Kappa Alpha Psi and the NAACP, gathered outside of the NFL’s Park Avenue headquarters to protest what they see as the quarterback’s blackballing by the league’s owners because of his protest. Some Black football fans have said they will not watch another game until Kaepernick is signed.

Despite the fact that several NFL coaches, including Seattle’s Pete Carroll and Baltimore’s John Harbaugh, believe that Kaepernick is good enough to be a starter at best and a capable backup at worst, NFL owners have remained steadfast. Their goal is to make an example of him and to intimidate others from engaging in similar protests.

But if Philadelphia Eagles safety Malcolm Jenkins, members of the Cleveland Browns and players on other teams around the league are any indication, the ploy has failed — badly.

“I think if that was the goal, it didn’t work,” said Jenkins, who raises a fist of defiance on the sidelines as the Anthem plays. “You had the largest protest (Aug.22) with the amount of players that they had. More and more guys are joining every week.”

Right now, Jenkins said, the focus needs to be on exactly why the players are protesting.

“We want to fight with those who are fighting for equal rights,” he said. “We want to make sure to keep the focus there.”

Another reason why the owner’s gambit isn’t working is because the protests have become multiracial.

Before their Aug. 22 preseason game against the New York Giants, several Black members and one White player, tight end Seth DeValve of the Cleveland Browns took a knee during the national anthem.

As Jenkins raised his fists in the air, Long put his arm around the Eagles safety. Britt put his hands on the shoulders of teammate Michael Bennett as he knelt during the national anthem and Carr did the same thing for Raiders defensive Khalil Mack.

While he’s not sure that the players can get Kaepernick back on the field, they can and should continue the dialogue on police brutality and racial injustice he started, Jenkins said.

“I think there’s a need for that next step,” said Jenkins, who has testified before Congress on the issue. “We’ve gained the attention, we’ve done the protests, we’ve had the stage, we have the microphones, and now people are looking for solutions. I think there’s opportunities for guys to educate themselves about the system and the situation in their particular cities.”

“For instance,” Jenkins said, “In (Pennsylvania) when it comes criminal justice reform and mass incarceration, they trying re-introduce mandatory minimum sentencing. We’re trying to make sure that doesn’t happen. “

What Kaepernick started by simply is taking a knee is gradually into a movement and that’s worth more than any Super Bowl ring or accolades he will ever receive as a player.