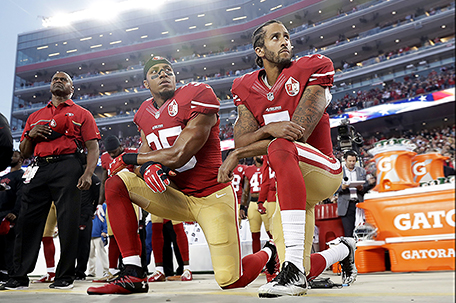 ABOVE PHOTO:  San Francisco 49ers safety Eric Reid (35) and quarterback Colin Kaepernick (7) kneel during the national anthem before an NFL football game against the Los Angeles Rams in Santa Clara, Calif. The dozen NFL players who have joined Kaepernick’s protest of social injustices by kneeling or raising a fist during the national anthem have faced vitriolic, sometimes racist reactions on social media and at least one has lost endorsements. None are deterred by the backlash.  (AP Photo/Marcio Jose Sanchez, File)

This was supposed to be a column on Monday night’s Philadelphia Eagles/Chicago Bears game.

I had planned on making this column totally and completely about football.

But, I saw the video of Terrence Crutcher getting shot in cold blood for the crime of asking for help when his car broke down by a Tulsa, Oklahoma police officer as he stood, hands raised.

I saw residents of Charlotte, North Carolina take to the streets in protest due to the murder of Keith Lamont Scott by police as he sat in his car, mistaken for the subject of a fugitive warrant.

So, while it is important to note that the Eagles defeated the Bears on Monday night, giving the team a 2-0 record, I’m going to devote this column to something more important than football.

I’m going to write about how it might be time for everyone who’s tired of seeing more and more of the nation’s athletes join San Francisco 49ers quarterback Colin Kaepernick in National Anthem protests to stop complaining about how “disrespectful” you think these protests are, and start listening to the message they send because whether you like it or not, they’re not going away.

In fact, I hope they grow.

On Monday night, safety Malcolm Jenkins, corner back Ron Brooks, and defensive end Steven Means raised their gloved fists during the National Anthem. Aggrieved fans in serious need of a visit to the National Constitution Center on 5th and Market took to social media to complain about the protest and accused the trio of attention seeking.

If that was the message you got from the trio’s raised fists, you’ve missed the point, Jenkins said.

“We’re not doing this made-up thing to get attention,” Jenkins said. “Real lives are being lost. Real communities are being affected. The negativity comes from people’s unwillingness to digest the hard truth.”

As a 50-something Black man who occasionally finds himself walking down the street, changing a tire on my car, or any of the myriad of things that seem to get Black men killed by police these days, I agree with Jenkins, Kaepernick and all of the other athletes who are protesting because, quite frankly, this persistent pattern of state-sanctioned violence against unarmed Black men has to stop.  Not only does it have to stop, the perpetrators in uniform and hiding behind their badges need to be punished for their crimes.

And despite what The Clash may have told you in the song “Know Your Rights”, murder is a crime, even if it’s done by a policeman or an aristocrat.

But until that happens, athletes in all sports and people of good conscience shouldn’t stand for the National Anthem.

And all of the people who want to get mad about that to the point of questioning people’s patriotism need to instead understand why so many African-Americans might feel that their life could in danger because of a routine traffic stop or because your vehicle stalls on some lonely highway.

I applaud Brooks, Jenkins and Means for raising their fists during the national anthem because they play in a city where African-American athletes are expected to just shut up and play. If they raise their fists during this Sunday’s game at Lincoln Financial field, they are going to hear a crescendo of boos and U-S-A chants.

That’s not how a true patriot would react. True patriots would recognize that we have a Constitutional amendment that governs freedom of speech.

True patriots would empathize with their fellow Americans who are having their rights violated through police brutality.

True American patriotism means that you embody the principles of the Declaration of Independence and the Constitution.  It also requires that you understand that the flag and the National Anthem might mean something different to those battling oppression than it does to you.

Whether it’s the right to bear arms or voicing displeasure at the police shooting unarmed African-Americans, it seems sometimes like the Constitution doesn’t necessarily apply to people of color in the minds of some of you.  It’s really easy to tell an athlete with a fat contract to “shut up and play!” when they want to protest police brutality, but it also negates the fact that being an athlete probably hasn’t spared this person the indignity of being pulled over by police for “Driving While Black”.

But they’re not supposed to talk about that. They’re “the entertainment”.

Here’s the thing, if you truly consider yourself a “patriot” and you truly believe in principles of the Declaration of Independence and the Constitution, you’d do more for your community if you put on a Black glove, stretched out your arm, and raised your fist at Lincoln Financial Field on Sunday in solidarity with Brooks, Jenkins, and Means because, in the words of the Rev. Dr. Martin Luther King,  “Injustice Anywhere is a threat to justice everywhere.”

Today, the injustice of police brutality is being visited upon African Americans, Latinos and other people of color.

Tomorrow, it could be you.