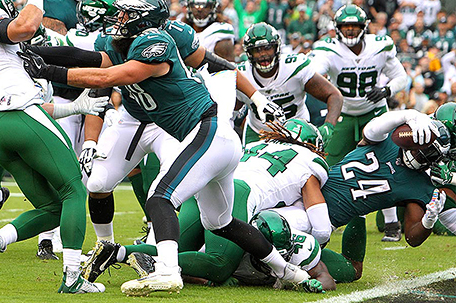 The relatively easy game the Philadelphia Eagles played against the New York Jets may be the only break the team gets for a while.

With the most difficult part of their schedule just ahead of them beginning with the Minnesota Vikings next Sunday, the Philadelphia Eagles should savor their 31-6 win over the hapless New York Jets.

It may be the least taxing game they get for a while.

Improving the team’s record to 3-2 was relatively easy for the Eagles. The defense sacked Jets quarterback Luke Falk 10 times and came away with two defensive touchdowns — a 51-yard interception return by linebacker Nathan Gerry and a 44-yard fumble return by recently acquired cornerback Orlando Scandrick — as part of an effort that held the Jets offense to just 128 total yards.

The performance of the defense was able to cover up for an average performance by the offense, which played down to the level of its competition despite quarterback Carson Wentz having some pretty powerful weapons to work with, wide receiver DeSean Jackson’s injury notwithstanding. The Birds compiled just 265 yards of total offense — 84 rushing and 189 yards passing — and were a lackluster 5-of-13 on third down conversions. Sure, they got two touchdowns, but they also left a lot of points on the field due to uninspiring play.

The days of the Eagles getting away with that will come to an end on Sunday in Minnesota, the site of the team’s win in Super Bowl XLII. They can ill afford to be inconsistent on either side of the football because for the next three weeks, the team will be playing road games against playoff contending teams. From Minnesota, the Eagles head to Dallas to take on the hated Cowboys, then to Buffalo to take on a Bills squad that features one of the league’s best defenses.

Cornerback Malcolm Jenkins knows this slate of games could be make or break for the Eagles.

“Where we are in the season, being right in the thick of things, being in the hunt, three games on the road that’s tough,” he said. “If we can come out of this stretch with three wins, that sets up nicely. It ain’t getting easier.”

For an Eagles offense that has yet to play its best game of the season, Wentz said the Birds have to get things going on a consistent basis at this critical stage of the season.

“We have to stay on the field. We know we can be better. We’ve shown it,” Wentz said. “We know we can, but we now have to execute it.”

One thing that will bode well for the Eagles offense is the running game. Throughout the season, the Birds rushing attack with Jordan Howard and Miles Sanders have shown flashes of brilliance. In a crucial road win over the Green Bay Packers, the duo combined for 176 yards on the ground.

“It’s going to help the offense out even more,” said Howard, who gained 62 yards on 13 carries and one touchdown against the Jets. “I feel like the pass game is going pretty well, but if we have the running game complimenting the passing game, it’s going to make us even harder to stop.”

But the biggest concern in this current stretch of games will be how well the Eagles patchwork secondary that now includes the recently added Scandrick holds up. If the Birds can get the kind of pass rush they got against the Jets over a three-week period, they will be cooking with gas.

Unfortunately, not every team is going to be the New York Jets, something Jenkins acknowledges. Beating a hapless team to improve your record is nice, but it won’t help you cover Vikings receiver Adam Thielen. Or stop Cowboys running back Ezekiel Elliot. Or stop Bills defensive lineman Jordan Phillips from coming for Wentz.

The Eagles are going to have to do better. Period.

“We’ve got to get back to the drawing board, watch the tape, prepare, go compete like any other week,” Jenkins said. “What we did this week doesn’t carry over at all to next week.”