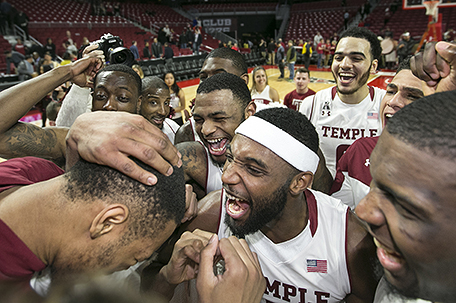 Three members of the former Big Five of Philadelphia Basketball will be partaking in March Madness beginning this weekend.

If it all works out the way some hope, the Barclay Center in Brooklyn, New York may turn into a mini-version of the Palestra.

Why? Because if Temple and Villanova defeat their first round opponents in this weekend’s NCAA Men’s College Basketball championships, you’ll have the two titans of Philadelphia’s Big Five vying for the right to move on from the Round of 32 in the annual tournament.

No. 10-seed Temple (21-11) and No. 2-seed Villanova (29-5) will both begin the NCAA Tournament Friday at the Barclay Center in the tournament’s South Region bracket.  The Wildcats will take on UNC-Asheville around noon, while the Owls will play their first round game against the Iowa Hawkeyes (21-10) later on that day.

But while the South bracket might lead to a Big Five matchup, Temple and Villanova aren’t the only members of that storied rivalry participating in March Madness. In the West Bracket, we have the St. Joe’s Hawks (27-7) taking on the University of Cincinnati Bearcats on Friday night at around 10p.m. in Spokane, Washington. The Hawks punched their ticket to the Big Dance by winning the Atlantic 10 Conference tournament.

While having all three of these teams in the tournament gives local college basketball fans something to cheer about, none of them has an easy road to the next round.

Villanova is the highest of the local seeds at No. 2 seed in the South Region. The Wildcats spent some time ranked number one this season and they have three players averaging double figures in scoring.

The Wildcats backcourt duo of Josh Hart (15.3 points per game) and point guard Ryan Arcidiacono (11.9 points per game) can put the ball in the basket from beyond the three-point arc. and junior small forward Kris Jenkins is also an option in the Wildcats offense.

And despite having that same kind of firepower in recent years, it’s meant absolutely nothing. For the last two years, the Wildcats have been a favorite to go to the Final Four, only to get knocked out in the second round.

Those memories are something that the team is trying to put out of it’s mind, Jenkins said.

Meanwhile, the Owls, the lowest ranked of the three local teams, face an uphill battle as they take on a Hawkeyes team that was one of the hottest teams in the nation at one point.

Iowa is led by first team All-Big Ten forward Jarrod Uthoff, who averages 18.9 points per game and junior forward Peter Jok, who scores 16.2 points per game.  The Hawkeyes have been ranked in the Top-10 and have beaten the Spartans of Michigan State, the number two team in the Midwest bracket, during the regular season.

Temple will be led by a pair of seniors, guard Quenton DeCosey, who averages 15 points per game and 6-8 forward Jaylen Bond, who is coming off a pair of solid outings in the American Athletic Conference Tournament. He had a double-double 17 points and 10 rebounds.

The Owls also rely on point guard Obi Enechionya, who has been averaging 14 points per game over the last 14 games.

If Villanova and Temple make it through their first round opponents, they’ll take each other on in what will be a rematch of the game the two teams played on Feb. 17 at the Liacouras Center, which Villanova won 83-67.

But because it’ll technically be a Big Five matchup, it’ll still be anybody’s game.

Meanwhile, head coach Phil Martelli’s Hawks squad is the hottest of the local teams as they head into the tournament.

The Hawks, the No. 8 seed in the West Region, are led by A-10 Player of the Year DeAndre Bembry. The 6-6 junior forward is averaging 17 points and 7.7 rebounds and he also leads the team is assists with 4.5 per game. He has scored in double figures in 33 games.

Senior forward Isaiah Miles (6-7), was named Most Outstanding Player in the A-10 Tournament. He is the team’s leading scorer with 18.8 points per game.

If the Hawks can beat Cincinnati (22-10), they will play the winner of the game between No. 1 seed Oregon and No. 16 seed Holy Cross, a 59-55 winner over Southern in the First Four round.

So Big Five fans, it’s time to find out which school will still have bragging rights after this weekend. Fill out your brackets (if you haven’t already) grab your friends, hit your favorite wing spot, and park in front of a large screen television to witness some of the best, and most unpredictable games college basketball has to offer….