The Changing Of The Guard? 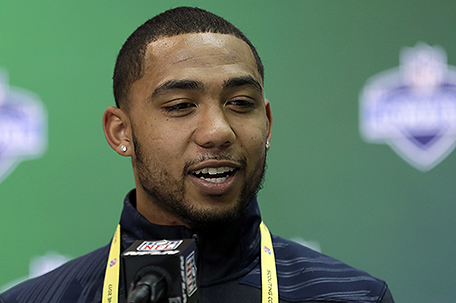 While the Philadelphia Eagles recent defensive draftees will probably get a chance to play this season, the jury is out on the offensive newbies.

If there’s anything that should jump out at you regarding the Philadelphia Eagles mini-camp at Nova Care this weekend, it’s that the eight drafted rookies could, at least on defense, give their  veteran teammates a run for their money in terms of playing time.

During the 2017 draft, the Eagles showed everyone that defense would be a priority by using five of their eight draft picks on the defensive side of the ball. If they perform as advertised, rookies like defensive end Derek Barnett, defensive tackle Elijah Qualls and cornerback Rasul Douglas could change the game for the Eagles defense.

Defensive backups and starters like Vinny Curry, who struggled last season after signing a big contract, are going to be pushed throughout the training camp season. The Eagles secondary needs bodies and people who can cover people long enough to allow the team’s front seven to wreak havoc on opposing quarterbacks.

While the defensive rookies have more than a puncher’s chance to make the team and get some quality playing time in 2017, it’s going to be interesting to see if the Eagles offensive rookies will be able to do the same.

To me, the most fascinating of the Birds offensive draftees is running back Donnel Pumphrey. The former San Diego State star re-wrote the school’s rushing books by breaking records in rushing and all-purpose yards held by Pro Football Hall of Famer Marshall Faulk.

The 5-9, 180-pound Pumphrey is the NCAA’s all-time leader in rushing with 6,405 yards on the ground. He finished his collegiate career ahead of the University of Wisconsin’s Ron Dayne, the University of Texas’ Ricky Williams and former University of Pittsburgh (and Dallas Cowboys star) Tony Dorsett.  In 2016, Pumphrey gained 2,133 yards and scored 17 touchdowns.

The most obvious question to ask is if he’s capable of being that three-down running back in head coach Doug Pederson’s offense? Where Pumphrey may have a problem with this is his stature, especially since he’s less than 200lbs. Some football observers are saying that Pumphrey is going to be the next Darren Sproles as a third down specialist and kick returner, rather than the next LeSean McCoy.

If Pumphrey is interested in playing at the running back spot, he may need to put a few rocks in his pockets and bulk a bit while maintaining his 4.4 speed in the 40-yard dash. Joe Douglas, Eagles director player personnel, said Pumphrey plays bigger than his size.

“You’re talking about a guy that broke Marshall Faulk’s record,” Douglas said. “Great hands and great feet. And don’t let the size fool: this guy, he’s a little dog that thinks he’s a big dog, and he plays that way. I love the way he plays and how productive he is.”

With Western Michigan standout Corey Davis and former Clemson star Mike Williams gone within the top 10 picks in the draft, the Eagles wound up picking a pair of wide receivers with a ton of potential that they could develop and bring along slowly.

In the fourth round, the Eagles picked up former North Carolina star wideout Mack Hollins, and in the fifth round, they drafted former West Virginia star, Shelton Gibson.

What stands out about Mack is that he’s 6-4, 221lbs and can jump out of the gym. He can get separation in the passing game and is also the type of receiver that you can use in red zone situations. Looking at Hollins on film, he towered over smaller corners with his jumping ability.

Even if he’s not that high on the Birds receiving depth chart, Hollins will find a place on the team with his ability to be a gunner or outside receiver on special teams. During his time at North Carolina, Hollins was usually the first guy down the field to tackle the opposing punt returner. He was the Tar Heels special teams captain in all four years of collegiate career.

Gibson is another wide receiver who showed he was capable of stretching the field during his collegiate career. He averaged 22.1 yards per catch during his final season at West Virginia. He caught 43 passes for 951 yards and eight touchdowns.

Unless Hollins or Gibson has the mother of all training camps, they will likely not be ahead of Alshon Jeffery, Torrey Smith or Jordan Matthews on the depth chart, but they could give guys like Nelson Agholor and Dorial Green-Beckham a run for their money.

That’s going to depend upon their ability to be good route-runners, something receivers coming out college often struggle in their adjustment to pros.

“They are going to be a work in progress,” said Eagles head coach Doug Pederson. “Most wide receivers coming out of college don’t have an extensive route tree like we will possess, and so there’s a learning curve there. But both these guys are sharp. They understand offense and they understand coverage.”