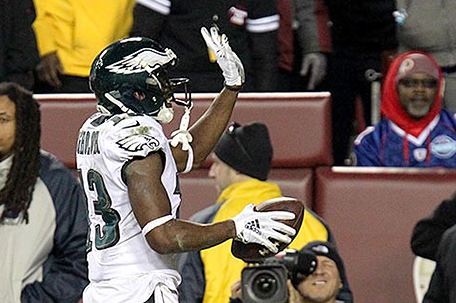 Despite taking 16 weeks to get over .500, the Philadelphia Eagles will start defending their Super Bowl title on Sunday.

LANDOVER, Md.—Even after a devastating 48-7 loss to the New Orleans, Philadelphia Eagles safety Malcolm Jenkins said he had no doubts about the Birds getting back to the playoffs to defend their Super Bowl crown.

His team rewarded his faith on Sunday with a win against the Washington Redskins at FedEx Field via a 24-0 shutout. The Eagles will now face the Chicago Bears, the team who helped them into the playoffs by knocking off the Minnesota Vikings 24-10 on Sunday, in next week’s Wild Card Round.

In a postgame speech to his teammates after the game, Jenkins said that the Birds are not sneaking in or backing into the playoffs. They are in the postseason because they earned it.

“For us, we are where we thought we’d be,” Jenkins said. “Nobody had to invite us in, we knew we would be here even though we’re showing up late. We’re hungry. For us, we’re excited about the opportunity to compete. Everybody might be shocked, but I don’t think the guys in this room are shocked.”

The Eagles will come into their matchup against the Bears on a roll and they seem to be peaking at the right time. The team has won five out of their last six games since losing to the Saints and like last year, have managed to overcome injuries on both sides of the football.

“The way that this year has gone, for us to be playing the way we are the last month of the season is a good thing,” Jenkins said. “I think we’re finding that cadence on offense, we’re finding that cadence on defense. Some of the younger guys who were forced into positions earlier in the year have experience and are making plays are the reason why we are having success. Hopefully, we’ll build on that process and we’ll be ready to compete.”

Meanwhile, head coach Doug Pederson said the difference for the Eagles during this final stretch run of the season was his trust of his veteran leadership and their blue-collar, workmanlike approach in preparing for each game.

“You know, we kept just staying the course,” Pederson said. “We had to just continue to follow the process — our process in Philadelphia — come to work every day and then roll up your sleeves and get better, just get one percent better each day and the guys did that. I trusted the leadership of the team the veteran players and they responded well the second half of the year.”

For the last two years, including last year’s run to the Super Bowl, the Eagles have arguably been one of the most resilient teams in the league. They’ve managed to get into the Playoffs and win a Super Bowl despite injuries on both sides of the ball, the most prominent being starting quarterback Carson Wentz.

Most notably, the Eagles lost three of their four starters in the secondary and will have a shot at defending their Super Bowl title.

“It’s a resilient team,” said Eagles quarterback Nick Foles, who tied an NFL-record with 25-straight completions in Sunday’s win over Washington. “It goes from leadership down. That’s what creates the environment. When a guy’s injured you see guys rally around the new guy. Even the guy who’s injured is there supporting and we’ve seen that with this team. That’s something that’s very special. It’s a resilient group. I enjoy everyday I get to go to their NovaCare facility and work with everyone in that facility I’m excited that we get to earn one more week of it.”

This weekend at Soldiers Field, the Eagles will be facing a Bears squad this is third  in the league in defense — first against the run and seventh against the pass. Chicago ranks third in quarterback sacks with 50. They are led by linebacker Khalil Mack, who has 12.5 sacks on the season.

The Birds will no doubt have their work cut out for them.

“Now are in the post season,” Jenkins said. “Throw out the regular-season and everything that’s happen before then. We have an opportunity to obviously go on the road against a quality opponent — versus the Bears and get ready to compete.”

The Philadelphia Eagles and Chicago Bears will take the field at 4:40pm on Sunday and fans can check out the action on NBC-10.